How low will they go? Guardian publishes cartoon by notorious anti-Semite, Carlos Latuff

Today's Guardian "Palestine Papers" update included the following illustration by one of the most prolific anti-Zionist and anti-Semitic cartoonists, Carlos Latuff – depicting Palestinian President Mahmoud Abbas as a sinister looking (gun wielding) Orthodox Jew.  (The Guardian casually referred to Latuff as "a Brazilian based cartoonist.") 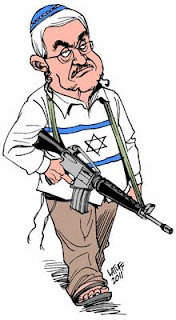 As I noted previously (in a piece for the JCPA, as well as a guest post for Elder of Ziyon), Latuff is a Brazilian political "activist" and cartoonist with an impressively large portfolio of work – much of which openly express anti-Semitic themes. Some of his caricatures seem to suggest that Israel is a unique and immutable evil in the world.  His work includes imagery frequently suggesting a moral equivalence between Israel and Nazi Germany – and he has explicitly acknowledged that this indeed his political view.

Latuff's work has been posted on various radical left websites and blogs, as well as several terrorist affiliated websites such as 'The Islamic Front for the Iraqi Resistance' (JAMI) magazine. Norman Finkelstein's official website has also featured Latuff cartoons. As I noted in my Elder of Ziyon post, a blogger at the site, Mondoweiss, made use of one of Latuff's cartoons during the flotilla incident. (Scroll down to bottom to see link to Latuff's cartoon)

Latuff's notoriety includes his participation in the 2006 Iranian International Holocaust Cartoon Competition – for his cartoon comparing the Israeli West Bank security barrier with the Nazi concentration camps. Latuff placed second in the contest.

In their 2003 Annual Report, the Stephen Roth Institute compared Latuff's cartoons of Ariel Sharon to the antisemitic caricatures of Philipp Rupprecht in Julius Streicher's Der Stürmer.

Even the Guardian's Ian Black noted that Latuff was among those cartoonists "drawing, without inhibition, on judeophobic stereotypes in the service of the anti-globalisation movement."

Latuff also has employed racist themes in service of his critiques of President Barack Obama.

Here is some of Latuff's work: 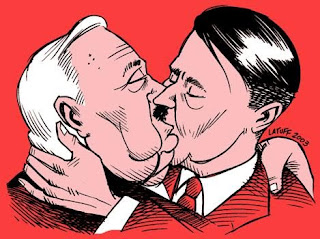 The above Latuff cartoon was published by Indymedia on Holocaust Remembrance Day. 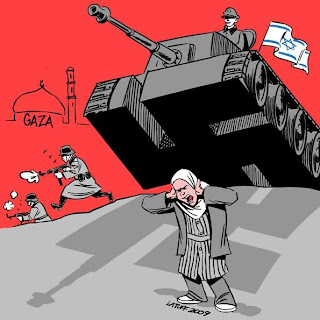 The above is yet another Latuff cartoon on Indymedia.  It makes sure there is no doubt that the Jewish state has morphed into the new Nazi Germany by showing the tracks of the Israeli tank shaped like swastikas.

The cartoon above by Latuff, depicting former Israeli prime minister Ehud Olmert cradling a dead Palestinian baby, was published on Indymedia. It suggests that not only do Israeli leaders intentionally kill Palestinian children, but also that such child murder is popular among the Israeli public and helps Israeli politicians get elected. 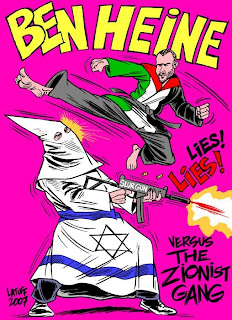 This cartoon, comparing Zionism to the Ku Klux Klan, made reference to an anti-Semitic cartoon by James Heine, which was posted at the blog, Daily Kos, but subsequently removed by editors of the site.

And, finally, an Israel so evil as to douse gas on a burning Lebanese child.

Their decision to employ the services of an extremist such as Latuff is a reminder that the most important story pertaining to the "Palestine Papers" is not the contents of the documents as much as it is the lengths the Guardian is willing to go in service of their viscous anti-Zionist agenda.