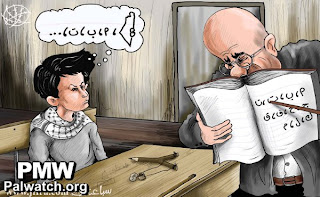 by Itamar Marcus and Nan Jacques Zilberdik
The idea of a "Palestine" that replaces Israel is more important to Palestinian children than education. That was the message of a cartoon in the official PA daily newspaper last week. A second message in the cartoon was that Palestinian youth are prepared to use violence.

The cartoon shows a teacher teaching a Palestinian child the letters of the alphabet. However, the text in the child's mind shows that he visualizes the map of "Palestine" replacing all of Israel before he starts learning the alphabet. The cartoon also carries a message of violence, as the child's pencil is shaped as a slingshot with a stone next to it.