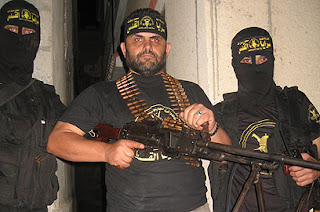 http://elderofziyon.blogspot.com/2010/10/islamic-jihad-explains-peace-activist.html
Islamic Jihad has responded to the controversy over publishing pictures of Turkish "peace activists" from Viva Palestina who visited Islamic Jihad and posed for commemorative photos with machine guns and RPGs.

Completely clueless about why the concept of peace activists proudly brandishing weapons is an oxymoron, Islamic Jihad stated that the pictures were "commemorative photos of solidarity" and emphasized that the activists were in no real danger at any point during their photo shoot. They emphasized that they didn't bring them to any border areas, for example, where they would have been at risk.

In other words, trying to get into Western heads as to what the problem is, they assumed that it was a safety issue!

They additionally said that the Turks were "motivated by an innate natural human solidarity with the besieged Palestinian people exposed to murder, genocide and torture at the hands of the Israeli occupation that kills children and abuses prisoners and burns the holy sites and traps civilians. These visits of solidarity are primarily of sympathy with the besieged and with the Palestinian right with the resistance."