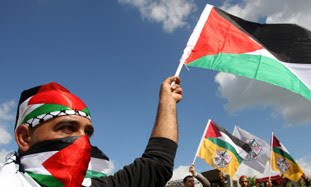 Palestinian sources report 1 killed, 16 wounded in Land Day demonstrations.
The IDF denied on Tuesday evening that a 15-year-old boy was killed by IDF near the security fence in the southern Gaza Strip. Earlier in the day, the Palestinian Ma'an news agency had reported that the boy, Muhammad al-Farmawi, was reportedly shot after approaching the barrier near the Dahaniya airport.

Additionally, a nine-year-old Gazan boy was reported to have been seriously wounded by IDF fire during a demonstration which took place at a land strip near the security fence in which civilian traffic is prohibited. Palestinian sources reported fifteen others were hurt; Ma'an said "dozens" of other people were wounded, apparently after they were told to demonstrate at the forbidden spot.

"The demonstrators knowingly occupied a zone in which movement is forbidden and attempted several times to reach the security barrier," read a statement by the IDF Spokesperson on the matter. "As a result, it is possible that a number of demonstrators were hurt." The statement further noted that the matter was being looked into, but vehemently denied that any demonstrators had been killed.

The strip of land separating the Hamas-controlled Gaza Strip from the Palestinian side of the security barrier is sometimes exploited by terrorists wishing to plant bombs near the fence, kidnap IDF soldiers or carry out attacks against Israel.

"IDF troops work constantly to ensure the security of residents of the Gaza belt and citizens of the State of Israel and will not allow any activity that endangers their security," the IDF statement concluded.

The demonstration marked the 34th anniversary of Land Day, which commemorates the killing of six Israeli Arabs on March 30, 1976, during protests over land confiscations.

1,500 Beduins gathered at the unrecognized community of Al-Arakhiv in the Negev to mark the occasion. According to Israel Radio, the demonstrators – who were joined by Arab Israeli MKs – chanted anti-Israeli and anti-Semitic slogans and waved Palestinian flags. MK Taleb A-Sanaa (United Arab List-TAAL) was quoted by the radio station as saying that the Palestinians must unite to protect the Aksa Mosque.

"There can be no Palestinian state without Jerusalem and without Al-Aksa," A-Sanaa reportedly said; fellow party member Ahmed Tibi was said to have expressed criticism of Israel's "racist" laws and mindset.

MKs Ibrahim Sarsour and Hanan Zouabi (UAL-TAAL), as well as members of the northern and southern branches of the Islamic Movement, also attended the demonstration.

At similar demonstration in Sakhnin, over 10,000 protesters spoke out against recent demolitions of Arab homes and "anti-Arab" bills such as the Nakba Law. Two of the demonstrators, their faces masked, held up posters depicting Hizbullah leader Hassan Nasrallah.

After more than a year of quiet, tensions along the Gaza border have risen recently. Last week two soldiers and two Palestinian gunmen were killed in clashes, after troops crossed the fence to confront terrorists placing bombs just over the border.
Gepost door Ratna pm dinsdag, maart 30, 2010