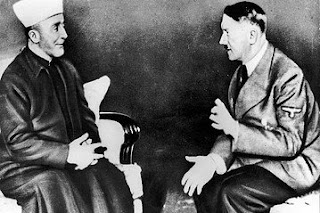 Give Giancarlo Desiderati credit for his unintellectual honesty. While most left-wing detractors of Israel claim their animosity toward the Jewish state has nothing to do with anti-Semitism, the head of a small Italian union, Flaica-Uniti-Cub, wasted no time with such sophism. Having long called for a boycott of Israeli goods, Mr. Desiderati last week made the logical next step. "Do not buy anything from businesses run by the Jewish community," his group's Web site urged Italians.

Jews around Europe are increasingly under attack since Israel decided two weeks ago to defend itself after years of rocket fire at its civilian population. There have been arson attempts on synagogues in Britain, Belgium and Germany. Police last week arrested Muslim protesters who wanted to enter the Jewish quarter in Antwerp. Several Danish schools with large Muslim student bodies say they won't enroll Jewish kids because they can't guarantee the children's safety. In France, a group of teenagers attacked a 14-year-old girl last week, calling her "dirty Jew" while kicking her.

At rallies in Germany and the Netherlands over the past two weeks, protesters shouted, "Hamas, Hamas, Jews to the Gas." In Amsterdam, Socialist lawmaker Harry van Bommel and Greta Duisenberg, widow of the first European Central Bank president, marched at the front of one such "peace" demonstration. They didn't join in the background chorus calling for another Holocaust. Instead, they chanted, "Intifada, Intifada, Free Palestine." Mr. Van Bommel later insisted this wasn't a call for Jewish blood but for "civil disobedience" -- a laughable defense given that terrorists during the last intifada murdered more than 1,000 Israelis.

Most of the anti-Jewish violence and protests in Europe come from immigrants. In what may have been a Freudian recognition of the changing face of Europe, CNN two weeks ago used footage of anti-Israeli protesters in London in a report about the growing anger in the "Arab and Muslim world." The mythical Arab Street now reaches deep into Paris, London, Berlin and Madrid.

After a burning car was rammed into a gate outside a synagogue in Toulouse last week, President Nicolas Sarkozy issued a statement that was as morally confused as his judgment of Israel's Gaza offensive. Mr. Sarkozy, who condemned both Hamas terror and Israel's attempt to stop it, also blurred the distinction between the victims and perpetrators of anti-Semitism in France.

His country "will not tolerate international tensions mutating into intercommunity violence," he warned, suggesting that the violence in France comes not only from French Muslims but Jews as well. Mr. Sarkozy's comments also suggest that the fighting in Gaza is the cause for attacks on Jews in France -- that is, that the Mideast conflict is fueling anti-Semitism in Europe. It is exactly the other way around.

The rage against the Jews that is exploding in Europe has been carefully nurtured; it is not spontaneous sympathy for fellow Muslims in Gaza. How else to explain the silence when Muslims in other conflicts, from Darfur to Chechnya, are being killed?

The depth of anti-Semitic propaganda in Palestinian and other Muslim societies is one of the most underreported facts about the Middle East. It is this anti-Semitism that predisposes Muslims in Europe to attack Jews and fuels the Mideast conflict. The hatred predates Israel's creation. To illustrate this point: The Palestinian leader during World War II, Hajj Amin al Husseini, the Grand Mufti of Jerusalem, conspired with Hitler to bring the Holocaust to Palestine. Luckily, the British stopped the German troops in Africa. The Mufti spent the war years in Berlin and was later indicted for war crimes but with the help of the Muslim Brotherhood escaped to Egypt. Hamas is the Palestinian branch of the Muslim Brotherhood.

Hamas and other Islamists continue what the Mufti had helped to start: a blend of European anti-Semitism and Islam-inspired Jew hatred. The rejection of Israel's right to exist is what drives their attacks. The media, though, largely ignores Hamas's ideology and its crimes of hiding its leaders and weapons among its own civilian population, and demonizes Israel's attempt to protect its citizens.

Hamas and other Islamists are not even trying to hide their ideology. Just read the Hamas charter or check out Hamas TV, including children's programs, for a nauseating dose of murderous anti-Semitism. Last week, the French broadcasting authorities banned Hamas TV for inciting violence and hatred. Unfortunately, just like Hezbollah TV, which is also banned in Europe for its anti-Semitic and jihadi content, audiences here can still receive these programs due to Saudi Arabia's Arabsat and Egyptian satellite provider Nilesat.

The Islamist variation of Jew hatred is now being reimported to Europe. Muslims in Europe, watching Hamas and Hezbollah TV with their satellite dishes, are being fed the same diet of anti-Semitism and jihadi ideology that Palestinians and much of the Middle East consume.

This brings a unique challenge to the difficult integration of Muslims in Europe. When it comes to issues like Shariah law and terrorism, one can expect a true "clash of civilizations." There is no Western tradition that would justify "honor killings." Anti-Semitism, on the other hand, is not alien to Europe's culture -- to the contrary, the Continent once excelled at it and many still share the feeling.

A Pew study from September shows 25% of Germans and 20% of French are still affected by this virus. In Spain, 46% have unfavorable views of Jews. Is there really no connection between this statistic and the fact that the Spanish media and government are among Europe's most hostile toward the Jewish state? Is it just a coincidence that Europe's largest anti-Israel demonstration took place Sunday in Spain, with more than 100,000 protesters?

A 2006 study in the Journal of Conflict Resolution based on the survey in 10 European countries suggests otherwise. Yale University's Edward H. Kaplan and Charles A. Small found "that anti-Israel sentiment consistently predicts the probability that an individual is anti-Semitic, with the likelihood of measured anti-Semitism increasing with the extent of anti-Israel sentiment observed."

With little hope that the media coverage will become more balanced and the incitement of the growing Muslim community will abate, the Jews in Europe are facing uncertain times.

Mr. Schwammenthal edits the State of the Union column.