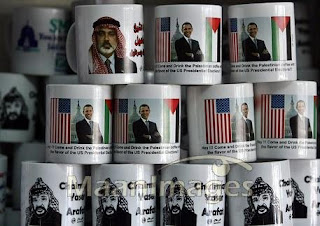 http://zionism-israel.com/israel_news/2008/11/filastin-al-rais-al-jadida-palestine.html
From Maan News -  a shop window in Ramallah shows a mug with a picture of Barack Obama above and next to mugs with pictures of former "Rais" Yasser Arafat.
If one picture is worth a thousand words, how many words are all these pictures worth? Earlier, Maan had announced that Barack Obama had promised East Jerusalem to the Palestinians. This rumor was quickly denied.
The text is in English about drinking coffee and evidently harmless commercialization intended perhaps for tourists, but the picture certainly illustrates the hopes that Palestinian Arabs have for the (probable) soon to be President of the US.
The text says something about the flavor of the U.S. presidential elections. Palestinian coffee is generally much better than that. If it has the flavor of the U.S. presidential elections, a lot of Palestinians will need emergency transport to Hadassah hospital to get their stomachs pumped in a rela hurry.
Barack Mubarack.
Ami Isseroff
Copyright - Original materials copyright (c) by the authors. Originally posted at http://zionism-israel.com/israel_news/2008/11/filastin-al-rais-al-jadida-palestine.html. Please do link to these articles, quote from them and forward them by email to friends with this notice. Other uses require written permission of the author. Circulated by ZNN. To subscribe, send email to znn-subscribe@yahoogroups.com
Gepost door Ratna pm woensdag, november 05, 2008