Yesterday, new Eldress Suzanne noticed (Kilgore Trout at LGF posted his findings 5 minutes before Suzanne did) that Reuters has cropped a photo taken from the Turkish Hurriyet newspaper showing the likely Turkish mercenaries aboard the Mavi Marmara holding down an IDF hostage they had stabbed and snatched during their attack on Israeli soldiers.

The original photo that shows a Turkish man with a knife in the lower-right, and a stabbed Israeli: 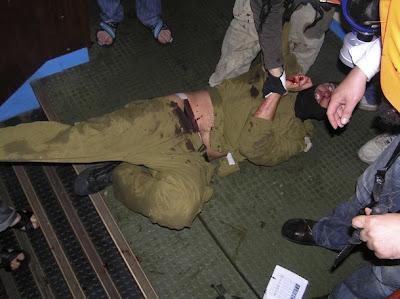 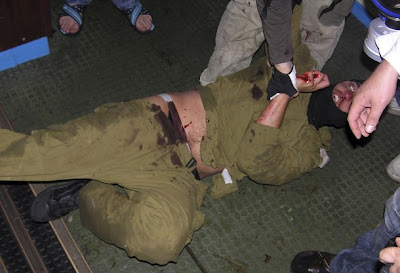 One of my commenters, Frankie, emailed Reuters about the deception. They responded (after asking who the hell he was, anyway) that they released both photos to their clients.

The problem is that they only released the uncropped, original photo hours after Suzanne and others had noticed and complained about the deception!

There is no question that someone at Reuters purposefully decided to crop out the key detail.

Reuters also did not update the caption to mention that the soldier was stabbed, implying that his blood-stained pants might have just been a pre-existing condition, I guess.

And, of course, this photo was not the only one. As LGF noticed, Reuters published this picture: 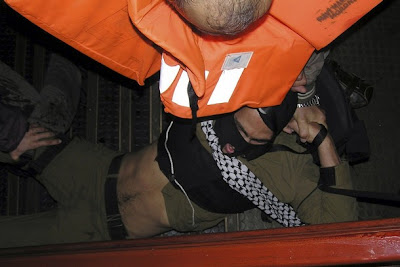 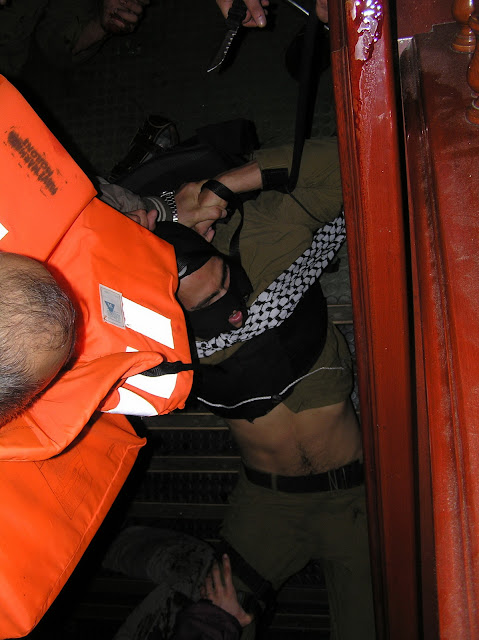 By sheer coincidence, I'm sure, Reuters cropped out the serrated knife, the pool of blood and part of another injured IDF soldier on the top of the IHH picture!

Via the Philosémitisme blog, here's the part that Reuters felt was not newsworthy:

Nah, that would just detract from the story.

And does no one think it is odd that a supposed humanitarian organization is publishing photos celebrating the violence that its members perpetrate?

UPDATE: Again, after the complaints, Reuters re-released the photo with the incriminating parts and is pretending that there is no problem.
Gepost door Brassé-Limburg pm woensdag, juni 09, 2010