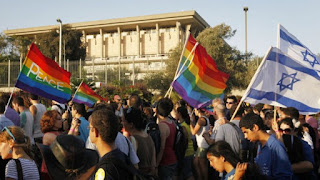 Israelis walking past the Knesset during the annual gay parade in Jerusalem, July 29, 2010. (Miriam Alster/FLASH90)

Marissa Newman  is The Times of Israel political correspondent.

A day after it marked its first-ever LGBT rights day, the Knesset on Wednesday scrapped five gay-friendly bills, drawing a furious response from the opposition.

The opposition-spearheaded bills sought to recognize same-sex widowers of slain soldiers, recognize civil unions, ban conversion therapy for minors, and require medical professionals to study gender and sexual orientation prior to their licensing. The proposals were all opposed by the coalition.

Likud MK Amir Ohana, the coalition’s sole openly gay lawmaker, was in the Knesset at the time, but was not present in the plenum for the vote.

Zionist Union MKs Merav Michaeli and Revital Swid proposed two similar bills to have the state recognize the same-sex partners of slain soldiers, or the same-sex parents of the victims, for purposes of compensation.

Responding to the bill, Deputy Defense Minister Eli Ben-Dahan argued that the bill was unnecessary, as the Defense Ministry already recognizes same-sex couples in this regard. The two bills were voted down 37-46 and 36-46 respectively.

Zionist Union MK Tzipi Livni’s bill on civil unions also fell in a Knesset vote, 40-47. The proposal, which sought to establish criteria for unions that would be recognized by the state, was designed for couples who are not considered Jewish by the rabbinate, for same-sex unions, and for Israeli couples who seek a religious marriage but do not want the rabbinate to oversee their wedding, she said. 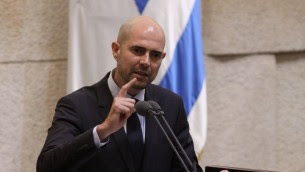 “I’m happy that today in the Knesset, there is a representative of the gay community, MK Amir Ohana, and there is progress and ministers come to events by the LGBT community,” she said. “They love like everybody else, and want to live with their partners like everyone else. And my God would let them get married.” While likely a jab at the absent Likud member, Livni neglected to mention the other openly gay MK in the Knesset — MK Itzik Shmuli, a member of her party.

Presenting the government’s stance, Housing Minister Yoav Galant (Kulanu) said the Religious Affairs Ministry opposed the bill, and in accordance with the coalition agreements, the coalition would oppose it.

Next up, a bill by former health minister Yael German (Yesh Atid) proposed to criminalize gender conversion therapy for minors.

Galant, speaking on behalf of Justice Minister Ayelet Shaked, said the bill “does not point to equivocal damage as a result of the conversion therapy, but only potential damage, which exists in any other psychological treatment as well.”

“The formulation of the bill would likely apply to every conversation with a minor,” he said.

Thirty-seven MKs voted in favorof the bill, 45 opposed it.

Another bill by Meretz MK Michal Rozin that would see the Health Ministry condition license medical professionals on receiving specialized training on gender and sexual orientation was shot down with 44 opposed and 33 in favor.

“I oppose it and that is all I will say,” Health Minister Yaakov Litzman of the ultra-Orthodox United Torah Judaism party said. “In the weekly [Torah] portion, we are told about the golden calf and the people of Israel’s sins. The people have spoken in that we are in the coalition, and you aren’t.” 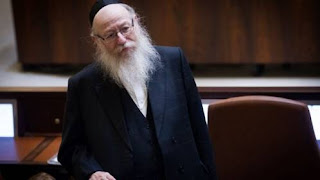 The Knesset’s LGBT Lobby subsequently condemned the health minister for “homophobia.” “We condemn and are shocked by Minister Litzman’s remarks. He ought to learn a bit about democracy. From the moment he is elected he is committed to serving the entire population, and his homophobic attitudes can’t govern his office policies,” Michaeli, Rozin, and German said in a statement on behalf of the caucus.

The Zionist Union later sent out a message condemning the coalition for torpedoing the bills a day after the LGBT rights day. “It turns out the coalition merely uses the members of the LGBT community for public relations, and in the moment of truth opposes all the laws benefiting it,” it said. The party specifically called out Likud MK Sharren Haskel, a chairperson for the Knesset’s LGBT community Lobby, for voting against the legislation, and Prime Minister Benjamin Netanyahu and Culture Minister Miri Regev for skipping the vote.

During Tuesday’s events, the committees and plenum were dedicated to the issue of LGBT rights — a first for Israel’s parliament. Netanyahu attended the session and requested permission to address the plenum.

“I asked to come here in the middle of a busy day to say one thing to the members of the LGBT community — every person was created in the image of God,” the prime minister said. “This is an idea that was introduced to humanity by our nation thousands of years ago, and this is the principle that must guide our national life today.”