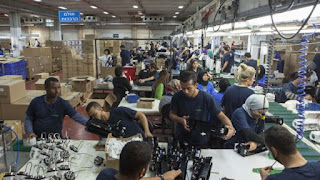 Employees work at the SodaStream factory built deep in Israel's Negev Desert next to the city of Rahat, Israel, Sept. 2, 2015. (AP/Dan Balilty)

SodaStream, the drinks firm hit by boycott calls two years ago, made redundant its last Palestinian workers Monday after Israeli authorities refused to grant them work permits, the company said.

The 74 Palestinian staff, many of whom had worked at the Israeli company for at least five years, had been caught in a permit battle between the company and Israeli authorities since SodaStream’s main factory moved from the West Bank into Israel.

The company was due to hold a ceremony for them on Monday. A total of around 1,200 people work at the factory.

The Israeli company, which manufactures a device for making fizzy drinks at home, announced in late 2014 it was closing its plant in the West Bank following a boycott campaign that included targeting Hollywood actress Scarlett Johansson after she advertised its product. 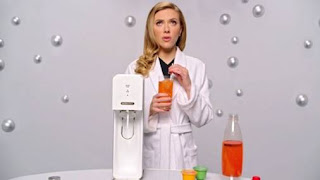 The plant closed in October 2015, with more than 500 Palestinians made redundant, the company said.

They relocated the factory inside Israel, bringing 74 experienced Palestinian workers with them, as well as hiring hundreds of Israeli workers.

But the Israeli government refused to grant the Palestinians work permits beyond the end of February, according to the company.

The company initially threatened to halt production at its factory unless the “essential” workers were given permits.

However, it later backed down and made them redundant.

Nave said the company would continue, however, to fight to get work permits for the Palestinians.

“It is a tough day for us, and all the SodaStream workers, but this is not the end of the road,” he said. 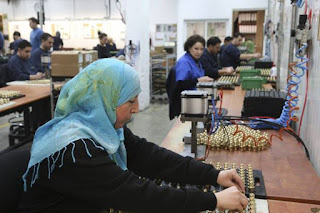 A Palestinian woman works at SodaStream’s plant at Mishor Adumim, in the West Bank, February 2, 2014. The factory closed in October 2015 under boycott pressure, and relocated to Israel. Hundreds of Palestinians lost their jobs. (photo credit: Nati Shohat/Flash90)

COGAT, the defence ministry body responsible for coordinating Israeli government activity in the Palestinian territories, declined to comment on the redundancies but reiterated that it had helped facilitate the movement of the factory.

“COGAT has taken many measures to help the factory and provided temporary permits to hundreds of labourers in the past year and a half to enable the transfer [of the factory],” a statement said. 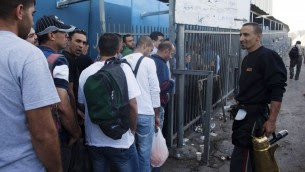 Palestinian workers wait to cross through a checkpoint in Bethlehem, June 2, 2013 (Neal Badache/FLASH90)

According to COGAT, 58,000 Palestinians hold permits to work in Israel, with another 27,000 working for Israeli businesses in West Bank settlements and industrial zones.

SodaStream has called for that number to be increased but it would require a government decision.

Rights groups say Palestinians often have few options beyond working in Israeli settlement businesses, with their own economy faltering partly due to Israeli restrictions in much of the West Bank.