The illusion of 'conflict management'

“The problem is not a lack of political plans, it’s the lack of vision and a determined leadership.” 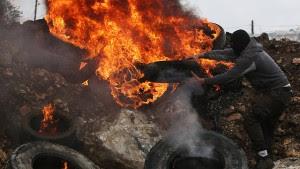 The illusion of ‘conflict management’

Op-ed: The problem is not a lack of political plans, it’s the lack of vision and a determined leadership. We should and must ask ourselves what is the vision for the State of Israel, and who are the leaders that could realize that vision.

Two important and interesting conferences that took place in Israel in recent weeks provided the opportunity for detailed analysis of our strategic situation. The speakers examined current threats and opportunities, and attempted to lay out a roadmap for the State of Israel in light of rapidly-changing external realities as well as internal challenges.

The first conference, entitled “From the Iranian Nuclear Program to the Nucleus of the Israeli-Palestinian Conflict,” was held under the joint auspices of the Council for Peace and Security; the Tami Steinmetz Center for Peace Research; the Daniel Abraham Center for International and Regional Studies; Molad – The Center for the Renewal of Israeli Democracy, and Tel Aviv University. The second event was the annual conference of the Institute for National Security Studies (INSS), entitled “Changing Rules of the Game?”
The two conferences were different in character: the first was academic, whereas the second featured encounters between politicians and the “players on the ground,” from military and security authorities to media and cultural figures.

Nevertheless, both conferences concluded that despite the dramatic events, regional instability, and sweeping strategic developments of recent years, the status quo alternative – managing the conflict while refraining from initiating change – may be a convenient short term option, but is a dangerous and even disastrous strategy in the long term.

No one denies that the current strategic reality is complex; nevertheless, it introduces new and unique political and security possibilities that could yield strategic advantages, if Israel were to become proactive. The challenges facing Israel must be analyzed from the standpoint of national security, and not merely through the narrow prism of military security.

The Council for Peace and Security, which brings together hundreds of members with rich security and public experience, has adopted this broad perspective in recent years. Accordingly, we emphasize the following points:

1.For the sake of future generations, everything possible must be done to ensure that Israel remains democratic, egalitarian, and secure, and the state of the Jewish nation.
2.For survival and sustainability, the State of Israel must separate from the Palestinians, which will then establish a Palestinian state existing in peace alongside the State of Israel.
3.The key threat to Israel’s existence as a democracy is the real possibility of a deterioration toward a one-state reality (mistakenly referred to as a “binational” state) that will not have a Jewish majority and will not be democratic. This threat is the main issue that we will address and draw attention to over the coming year.

Attaining these objectives requires making an effort to reach an agreement with the Palestinians, with the support and assistance of the Sunni Arab countries (with whom Israel shares, perhaps temporarily, some common interests), and with the involvement of the superpowers, particularly the US. At the same time, there is a need to reconsolidate Israeli society, including the Arab and Haredi communities who – separately and jointly – are important factors in Israel’s demography and influence its economy and stability.
This is a complex equation, and therefore political and other players in Israel tend to prefer paths that seem to be shorter and easier. Such escapism may take the form of unilateral actions, the expectation that regional forces will take the Palestinian chestnuts out of the fire for us, or the anticipation that the UN, Europe, and the US will impose an agreement on us; yet, none of these scenarios will prevent us from sliding further down the slippery slope to a Palestinian-Jewish state. “Conflict management” is also an illusion, as well as the artificial preservation of the so-called “status quo,” which does not exist in a natural order.

The proposed path will be anything but easy, and we cannot get to where we want to go unless we walk it, and unless we are willing to take the necessary risks. This requires leadership and a democratic decision.

We have no desire to present yet another solution to the problems and conflicts. We do not believe an ideal plan exists. Over the years, dozens of proposals have been put forth, and every day brings yet a new one. The problem is not a lack of plans, but a lack of vision and determined leadership. We must focus on the vision for the future State of Israel; and elect the leaders that can bring about a realization of this vision.

Brigadier-General (ret.) Gadi Zohar is the Chairperson of the Council for Peace and Security.