Terror victim's widower: We have no anger'

Natan Meir, whose wife was stabbed to death just outside her home, says 'we are not people who hate.'

The Meir family's lives were turned upside down this week when Dafna, a married mother of six, was stabbed to death by a terrorist just outside her home in Otniel. Despite the anguish, widower Natan Meir emphasized on Thursday that the family is not responding with anger and hatred.

Sitting only meters away from where his wife was murdered, Natan spoke of the family's emotions. "We have no anger," he said. "I am not angry at anyone. We do not curse Arabs. We are not people who hate. That's not how Dafna and I educated the kids. I spoke with the children yesterday and didn't hear a single bad thing. I talked to them about what we will do now. It's not simple." 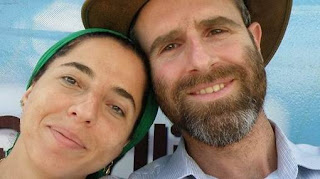 Natan recalled the final hours he was with Dafna. "For the last few days I had been sick and earned a few 'Dafna hours'," he said. "On Sunday I decided to get out of bed. I got up and we sat and had lunch together. Then I went out. I did not believe it was the last lunch I would have with Dafna."

Meir's eldest daughter, Renana, was nearby when the horrible scene unfolded and saw the terrorist and her dying mother. "I heard my mom scream and at first thought there was a centipede or cockroach, two things that easily could have startled mom," she said. "I walked up the steps and saw mom on the floor, struggling with the terrorist. I saw him try to take the knife out and screamed at my brothers not to come up," she recalled, describing the terrorist's attempt to remove the weapon from where he had stabbed Dafna Meir. 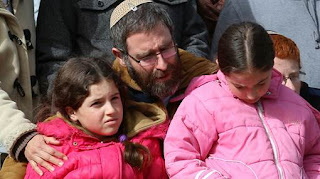 "Mom fought him and wouldn't let him hurt us," she continued. "It took a few seconds for him to realize he couldn't take the knife out and he ran away. I approached mom to see what happened. At first I wanted to remove the knife, but then I remembered that in an MDA class they told us not to remove a sharp object. I immediately called the MDA and told them what happened and for them to send an ambulance. The whole time I asked mom to keep breathing, but I understood and it was clear to me that it was over."

Hundreds of friends and relatives have been congregating at the Meir family home, including some people who didn't know Dafna, to support the family in their time of need.