Nurse, mother to four and foster mother to two recalled as joyful and always willing to help; to be buried in Jerusalem Monday 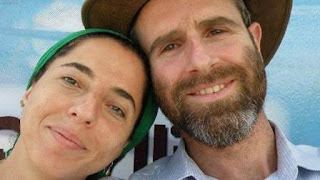 Dafna Meir, who was stabbed to death in a terror attack at the West Bank settlement of Otniel, is to be buried Monday in Jerusalem, the day after she was murdered as she tried to fight off an stabber who entered her home in a terror attack.

Meir, who leaves behind her husband and four children, aged 11 to 17 will be laid to rest on Monday morning at 11 a.m. at the Har Hamenuhot cemetery in Givat Shaul, Jerusalem.

The Meir family was also fostering two additional children, both below the age of five.

The funeral procession will begin in Otniel at 9 a.m. and move to the capital where she will be laid to rest.

Initial investigations indicated that Meir wrestled with the attacker in an effort to protect the three of her children who were in the home during the attack. The stabber fled the scene without continuing the attack and before he could reach the children.

Media reports said her teenage daughter witnessed the attack and described the terrorist to authorities.

Meir’s neighbor, right-wing activist Yehuda Glick, surmised the terrorist likely would have attacked three children in the house at the time if not for Meir fighting them off.

“The terrorist tried without a doubt to hurt the kids and Dafna, who was so small and short, fought him,” he told the Walla news site. “We are broken but strong.”

Meir, 38, worked as a nurse in the neurosurgery department of Soroka Medical Center, Beesheba. According to the Ynet new website she was also a pre-marital counselor for brides.

She was remembered as a “joyful” person by her neighbors.

“She was a happy woman, joyful, optimistic, driven, responsible, loving,” a neighbor, Yishai Klein, told Ynet. “Everyone in the settlement who was in pain knew they could call her 24 hours a day.”

Friend Liron Steinberg said she “was a woman who enjoyed life, the wittiest woman I know.”

“She always looked for how to help. If it was to take two foster kids, or as a nurse in the neurosurgery department. I work as a social worker in the Beit Hagai youth village and she would always invite home kids who didn’t have where else to be,” Steinberg told Ynet.

Following the attack, soldiers and police officers launched a manhunt for the attacker, setting up checkpoints in the area and firing flares into the air to provide lighting. The killer was believed to have fled to a nearby Arab village, possibly Khirbet Karme, located just north of Otniel.