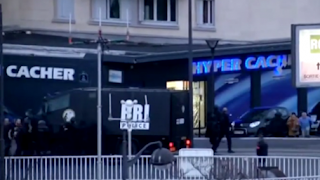 The gunman had threatened to kill the hostages if French authorities launched an assault on the Charlie Hebdo killers, who were holding at least one person hostage near Paris, police said. However, the police simultaneously attacked both sites and killed the Charlie Hebdo terrorists too.

French lawmaker Meyer Habib told Army Radio Friday that the hostages at the grocery store included “a family with kids, there shopping for Shabbat.”

Some reports in the local media indicated earlier that two people were killed in the attack on Hypercacher Alimentation Générale in Paris’s Porte de Vincennes area, but authorities did not confirm the deaths. 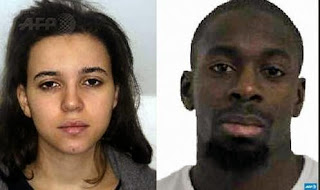 This combination of images released on January 9, 2015 by the French police shows Hayat Boumeddiene, left, and Amedy Coulibaly, right, suspected of killing a policewoman in Montrouge on January 8, 2015. Coulibaly is also suspected to have taken 6 people hostage at a kosher grocery store on January 9, 2015. He is linked to two brothers who massacred 12 people at satirical magazine Charlie Hebdo on Wednesday. (Photo credit: AFP/FRENCH POLICE)

After the incident began, shortly after 1:00 pm local time, police asked all shops on Rue des Rosiers, a historically Jewish street in Paris’s 4th arrondissement, to close down.

Army Radio reported that the gunman told police he would not free the hostages unless the Charlie Hebdo attackers, who were holding one person hostage in eastern Paris in a standoff with French police, were allowed to go free.

Police confirmed Friday afternoon that the gunman at the kosher market was the same man who killed a policewoman south of Paris on Thursday, and is linked to the assailants who stormed satirical magazine Charlie Hebdo on Wednesday, killing 12 people. He was named as Amedy Coulibaly, 32. Authorities were looking into suspicions that he took part in the Charlie Hebdo attack.

Coulibaly was seen with Charlie Hebdo suspect Cherif Kouachi in 2010 during an investigation into an attempted prison break in France, police said. He was convicted for his role and was well-known to anti-terrorist police. The man they were trying to break out was Algerian Islamist Smain Ait Ali Belkacem, who was sentenced to life imprisonment in 2002 for a bombing at the Musee d’Orsay metro station in Paris in October 1995 that left around 30 injured.

Yemeni officials said Friday that Charlie Hebdo suspect Said Kouachi trained with Al-Qaeda in Yemen in 2011 and fought Shiite militants in the country. He is also said to have attended a fundamentalist university in San’a starting in 2009.

Coulibaly is believed to have had a female accomplice in the shooting of the policewoman, according to the authorities, who identified her as Hayat Boumeddiene, 26. They were both described as “armed and dangerous.”

France Info radio reported that Coulibaly had two AK-47 rifles, and fired for around 20 seconds before taking hostages. He then phoned police to make contact.

An eyewitness at the kosher market told Le Monde that “people were shopping when a man entered and started firing everywhere.” The witness, who did not identify himself, said he was able to escape but heard more bursts of gunfire behind him. He said he only saw one gunman but a person waiting for him outside in the car told him several assailants were involved.

Police, firefighters and emergency personnel were at the scene.

The Paris attacks “are not just against the French people or French Jews, they’re against the entire free world,” Liberman said in a statement.

“This is another attempt by the dark forces of radical Islam to unleash horror and terror on the West. The entire international community must stand strong and determined in the face of this terror,” Liberman added.

An Israeli Foreign Ministry spokesman said earlier that he was not aware of any Israeli citizens among the hostages.

Ruben K., a Parisian Jew who knows the store well, told the Times of Israel that the market is most crowded on Friday, and is frequented by residents of Vincennes and St. Mande.

Four nearby schools were on lockdown.

“The suspect has been identified. Two people very close to him have been taken into custody,” the source said. The shooting was being handled by anti-terrorist judges, the prosecutor’s office announced Thursday.