Today is the tenth anniversary of Yasir Arafat's death.

In April 1991, Arafat attended the First Popular Arab and Islamic Congress, held in Khartoum and hosted by Hassan al-Turabi, a Sudanese Islamist leader.

PAIC I was meant to unify the Muslim terrorist world after the Soviets left Afghanistan and to strategize next steps to unify the Islamic 'umma.

As J. Millard Burr writes in his extraordinary account of this and subsequent PAIC conferences:

The first PAIC general assembly was, in fact and deed, a seminal moment in the development of both the modern Islamist revolution and the post-Soviet New World Order. Fusing his omnificent view of a modern and evolutionary Islam to that of the narrower revolutionary vision which had recently emerged in Shiite Iran, Turabi managed to square the circle and surmount a millennium of intra-Islamic factionalism. By the strength of his personality Turabi used the PAIC to forge a single, cohesive and unified Islamic movement uniting the Islamist umma from West Africa to Indonesia. It was an organization created to fill a void in the Muslim World and satisfy two primary needs: as a forum essential to the development of the Islamist revolutionary base, and as a unique meeting site where jihad could be discussed openly. The West could be openly reviled, and Turabi could expound at length on the West and its various nations where everything was permitted and nothing was sacred. 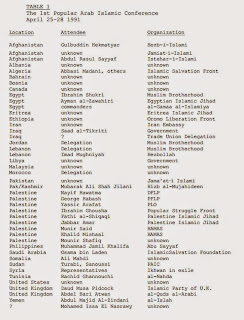 Most of the action in the conference went on behind the scenes, but some details have emerged, including Arafat's role:

PAIC I opened shortly after the Muslims world-wide commemoration of the "Day of Palestine" celebrated on 11 April 1991. The event had brought together leaders of a number of Palestinian movements -- Sunni and Shiite, secular and Islamist. Among those present were prominent Arab leftist and nationalist figures including Georges Habash, the Christian head of the radical secular Popular Front for the Liberation of Palestine, and Jabbar Amar who lived in Sudan and represented Palestine Islamic Jihad, a small movement increasingly dependent on Iran. Incredibly, at PAIC I observers saw Yasser Arafat in conversation with representatives of HAMAS, and members of the secular (and Marxist) Palestine movements circulated freely and"planned their next move."(16) Arafat -- who like Turabi teethed as a Muslim Brother and was thus well aware of the emerging "predominance of the Islamist trend" -- was reported to have played "a leading role" in Turabi's conclave. However, as was his custom, Arafat used the assembly to overplay his hand and confidently announced that, "Khartoum will become the springboard for the liberation of Jerusalem."

The conference, in retrospect, was in many ways the springboard for the resurgence of violent Islamism:

Ironically, many of the mujahideen who attended the PAIC, many of whom were battle hardened in such places as Afghanistan, Tajikistan and Kashmir, were not as devoted to the issue of Palestine as most people would think. If Jerusalem was to be liberated they would help, but in the end the task would have to be left to Palestinians. And while all PAIC members were devoted to the elimination of Israel, there had already been a plethora of useless conferences called to address that issue over the previous decade. For the Islamists who dominated the PAIC, issues such as the condition of the Muslim community at large, and the status of Islam in the world itself were of much greater importance than Palestine. Indeed, the conference theme was chosen with care and was one that all could agree on: The battle against Western hegemony. Just how (or if) the PAIC would be used to attack the West and its institutions was not really clarified. Although not as virulently anti-American as the Iranian revolution of the Ayatollah Khomeini, the PAIC still rejected the morals and mores of a "neo-Crusader" invasion that could drown Islamic culture. Thus, under Turabi's tutelage the PAIC broadcast the seeds of an epistemology that urged Muslims to turn away from the secular, hedonistic, and selfish proclivities that dominated the West. And it was reported that Turabi was cheered when he characterized the West as an unchecked tyrannical superpower, the incarnation of a "force materielle absolue et tyrannique," and even though Islam yet remained a "prisoner" of the West, it was and would remain "la conscience du monde."

Turabi attempted to unify the PLO and Hamas in 1993, but failed, as Hamas insisted on being treated as an equal partner in any unity, something Arafat opposed strenuously.

The book also notes how Turabi managed to present a moderate, intellectual face of Islamism to the West while scheming to destroy the West at the same time. He was even the subject of fawning magazine articles:

Educated in the United Kingdom and France, and wonderfully aware of how to manipulate the Western journalist's ego, Turabi evolved as the beau ideal of Muslim fundamentalists. And despite the growing Iranian arrangement, he received a decent press from some Western sources; a Christian Science Monitor article of March 1993 noted that "Sudan's image as a harsh Islamic dictatorship, imposed by fanatical mullahs in consort with Iran, does not exactly fit." The Monitor argued that Turabi was no Ayatollah Khomeini, and unlike the more fanatic Islamists, he was urbane, charming, and immensely well-read. Ostensibly, he presented a kinder, gentler, avuncular face of "Islamic fundamentalism" -- a movement that he himself preferred to label the Islamic renaissance. Indeed, the Sudan tried to project an image of a polity moving toward the idealized Islamic state.

1993 saw both the first World Trade Center attack as well as Arafat signing the Oslo Accords. Yet barely a month after being hailed as a "peacemaker," Arafat made an appearance at the second PAIC conference, as did Hezbollah's Hassan Nasrallah, Osama Bin Laden, Ayman al-Zawahiri, members of the Taliban and many other prominent Islamists.

The West was mostly clueless to the rise of radical Islam that these conferences heralded, and it remains clueless as to how "secular" revolutionaries were working hand in hand with the Islamists, and Shia with Sunnis, in what was meant to be a pan-Arab and pan-Islamic challenge to the West that would culminate with the 9/11 attacks - and, for Arafat, with the second Intifada. Of course, pan-Arab and pan-Muslim unity never occurred as Turabi hoped, but there has been a lot more cross-pollination between various movements than most realize, and PAIC was a seminal event in the rise of Islamic fundamentalism. And Arafat was an enthusiastic part of it.

There is a lot to read in this book.