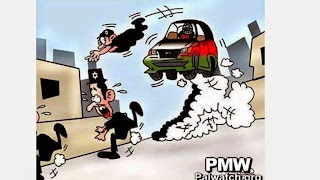 A screenshot from a cartoon published on the Facebook page of the Fatah movement depicting three Jews fleeing as car driven by a Palestinian tries to run them over.

The Fatah movement, headed by Palestinian Authority President Mahmoud Abbas, published several cartoons on its Facebook page encouraging Palestinians carry out car attacks against Israelis for the sake of the Temple Mount.

One of the cartoons on the page labeled the “Run Over Organization,” or “Da’es” in Arabic — a play on words on the Arabic acronym for the Islamic State or “Da’esh” — called to “hit the gas at 199 [km/h] for al-Aqsa,” a media watchdog reported.

Another post encourages Palestinians to “Run over, friend, run over the foreign settler!” the Palestinian Media Watch group said in a statement.

Another animated image showed three Jews, in black and with a Star of David on their hats, running for cover as a car bearing the colors of the Palestinian flag tries to slam into them. 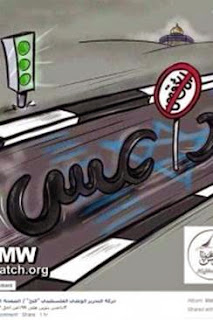 A screenshot of a cartoon posted on Fatah’s Facebook page urging to “hit the gas at 199 [km/h] for al-Aqsa.” The cartoon is labeled the “Run Over organization” or Da’es in Arabic.

The cartoons were posted amid increased tensions in Jerusalem after two vehicular terror attacks against Israelis in just two weeks.

On Wednesday, Shuafat resident Ibrahim al-Akary, 48,  plowed into pedestrians at a light rail station along the seam-line between East and West Jerusalem, killing a border policeman and a 17-year-old yeshiva student and injuring a dozen others.

A similar hit-and-run attack took place two weeks earlier at another train station along the seam-line when another East Jerusalem man, Abdelrahman al-Shaludi from Silwan, drove his car onto a platform, killing two, including a three-month old, and injuring several.

Both attackers were killed by police.

On Friday, riots erupted in East Jerusalem after the funeral for al-Akry.

The Facebook posts, published Thursday, follow a particularly contentious cartoon published on the official page of the Palestinian Authority National Security Forces depicting an Israeli soldier about to “rape” a woman representing the Dome of the Rock. 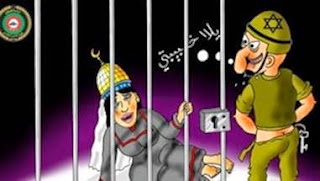 In the cartoon, a woman wearing a Dome of the Rock hat languishes in a prison cell, while a large-nosed IDF soldier stands outside with his pants unzipped, saying “Come on, sweetheart.”

The caption read “Daily cartoon: Al-Aqsa is being raped,” the Palestinian Media Watch group said, in reference to the Arabic name for the compound.

That cartoon came amid rising tensions at the Temple Mount between Israel and the Palestinians in recent months, with Palestinians frequently clashing with police in protest against Jewish visitors to the compound and Israeli politicians calling for Jews to be allowed to pray there.

Prime Minister Benjamin Netanyahu has called for calm and restraint and pledged not to change the status quo at the site, holy to both Jews and Muslims, though Arabs have charged Israeli lawmakers intend to allow Jewish prayer there.

The compound was closed to all visitors on Thursday last week following the attempted murder Wednesday of right-wing activist Yehuda Glick, who campaigns for Jewish prayer at the site, by a Palestinian from the Jerusalem neighborhood of Abu Tor.

Abbas called the closure “a declaration of war.”

Just days before the attempted assassination, Abbas submitted a request for an emergency meeting in the UN Security Council about the situation on the Temple Mount. He had earlier joined Hamas in calling for Palestinians to defend the site.

AFP contributed to this report.