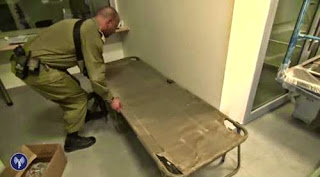 On Sunday we saw this story:

The IDF announced on Sunday that it was setting up a field hospital at the Erez border crossing between Israel and the Gaza Strip.

The field hospital was set to begin functioning at 8 p.m. on Sunday.

The IDF said that it will serve mainly women and children and will include a delivery room.

So how is this working out?

Walla reports that Hamas has actively prevented injured Gazans from going to the hospital to be treated by Israel. Even worse, on Wednesday Hamas shot ten mortars at the hospital!

Yes, Hamas is targeting a hospital, something that the "human rights" community seems not to care much about in this case.

During Cast Lead, the IDF set up a similar field hospital but Hamas didn't allow patients to go then either.

I explained why back in 2009, and the same reasons apply today, perhaps more so:

Why are Gazans not coming to the clinic? One would think that with thousands of injured civilians, including women and children, people would want to have the best care possible. No one would have any doubt that the Israeli doctors would do an excellent job and would have higher medical standards than those in Gaza. So why is it a failure so far?

The major reason is clearly Hamas. As the WHO official said, Hamas leaders would simply not allow Gazans to be treated there. A little thought would show why.

First of all, Hamas engineered the entire battle to maximize the number of Gazans who would die or be injured. Every day there are new deaths from injuries suffered during the fighting, and each time the number of dead tick up, Hamas has a new propaganda victory. It is not cynical to notice that Hamas values PR more than human lives; it is merely recognizing the cynicism of the terrorists.

The second reason is the flip-side of the first: Hamas does not want any news media to report that Israelis are selflessly treating Gazans. The contrast with the selfishness of Hamas, where they confiscated medical aid to treat terrorists at the expense of Gaza civilians, would not be flattering. Hamas needs to be looked upon as caring more about civilians than Israel is, and will go to any lengths to ensure that Israel does not appear humane.

Thirdly, there are more terrorists injured than Hamas is willing to admit, and they cannot go to Israel to risk capture.

The fourth reason is more insidious. Hamas has now enlisted an army of doctors who are willing to testify - really lie - about alleged Israeli use of white phosphorus, depleted uranium and DIME weapons. These doctors are happy to do so in order to be part of Hamas' jihad against Israel (or, in the case of the European doctors, to simply demonize Israel.)

Israeli doctors treating the same patients would see that these doctors are lying, and would have the physical proof.

A related thought is behind the fifth reason Hamas would never allow Israeli doctors to treat Gazans: because a percentage of Gazan civilian injuries are the direct result of Hamas and its allies' rockets, mortars and guns, as well as secondary explosions. We will never know how many of the innocent civilians who died or were injured were hurt from Hamas fire, but it is reasonable to assume that the numbers are significant.

There were reports from Israel that the tragic death of three daughters and a niece of a Palestinian doctor came not from Israel but from a Grad rocket, as determined by shrapnel removed by Israeli doctors who treated them.

We know that a percentage of mortars and Grad rockets fall short, and we know that these have sometimes fatal results. Shooting rockets hurriedly would increase the number of misfires. There was also at least one IDF video of the bombing of a weapons depot where a rocket shot out of the targeted area and flew a few hundred feet before landing.

In addition, there were some firefights in Gaza between the IDF and various groups, and one would not expect the terror groups to be as careful as the IDF in where they were firing.

How many civilians were killed by Hamas, or by secondary explosions of Hamas ordnance? We will never know. Most of the evidence is buried. But we can be sure that the number is higher than zero, and that Hamas will do everything necessary - including forcing Gazans to forego quality medical care - to ensure that this information never sees the light of day.