Hamas rockets exploded in the area, and there was heavy combat going on. UNRWA admits rockets hidden in their other schools have "gone missing." 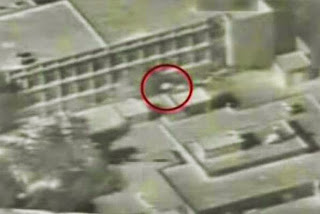 The UNRWA school in Beit Hanoun, Gaza. In 2007. it was repeatedly used as a launch site for mortars. (Archive 2007)
Photo Credit: IDF

UNRWA has admitted that a Hamas misfired rocket hit a U.N.-run school in Beit Hanoun in northern Gaza, according to Channel 2′s Ehud Ya'ari, but an errant IDF artillery shell also may have hit the facility, where Gaza sources claim an estimated 17 children and United Nations personnel were killed and 200 others were wounded Thursday afternoon.

Other sources have said the death toll is closer to 10.

Ya'ari also reported that one IDF shell struck the school, but this has not been verified.

However, if even one of  the explosions was a result of Hamas rockets, which seems to be the case, foreign media will have to throw up their hands in surrender to their constant attempt to show Israel as a mass murderer of innocent children.

Israel was immediately blamed for supposedly bombing the school, and UNRWA spokesman Chris Gunness jumped all over the IDF for the tragedy.

Israel has made it clear that Hamas is responsible for any and all deaths.

Foreign news agencies already have blamed Israel and have published gory pictures of the aftermath of the attacks, which came a day after U.N. Secretary-General Ban-Ki moon expressed "alarm" that 20 rockets were found for the second time in a UNRWA school but that they had "gone missing."

The IDF initially responded to the report of the alleged bombing of the school in Beit Hanoun with a statement saying, the IDF is "currently in the midst of combat, with Hamas terrorists in the area of Beit Hanoun, who are using civilian infrastructure and international symbols as human shields. In the course of the afternoon, several rockets launched by Hamas from within the Gaza Strip landed in the Beit Hanoun area. The IDF is reviewing the incident."

Beit Hanoun has been a favorite site for terrorists because of its close proximity to Gaza Belt communities.

Approximately 20-30 percent of Hamas rockets have landed or exploded inside Gaza, and Channel 10 television said that UNRWA, after having spewed out anger at the IDF, has confirmed that Hamas was the source of the attacks.

UNRWA spokesman Chris Gunness, who has been strangely subdued about not knowing that rockets were hidden in at least two UNRWA schools – and that number is certainly much larger – turned up the volume with his usual anti-Israel condemnation over the bombing of the school.

Gunness told Israel Radio that UNRWA tried to coordinate with the IDF during the day to leave a window open for civilians to leave the school, but that request "never was granted." He tweeted, "Precise co-ordinates of the UNRWA shelter in Beit Hanoun had been formally given to the Israeli army."

He has not had too much to say about the rockets that "have gone missing."

His boss U.N. Secretary-General Ban Ki-moon, who was not so worried that the first batch of rockets found in a UNRWA school last week was turned over to Hamas, now is furious that no one knows who picked up the second batch. A wild guess might be, possibly, maybe, that they went back to their rightful owners, Hamas.

"Those responsible are turning schools into potential military targets, and endangering the lives of innocent children," Ban stated.

Canada's Foreign Affairs Minister John Baird stated Wednesday, "Even more alarming were reports that in the first case, officials with the United Nations returned these weapons to Hamas, a listed terrorist organization, once Israeli officials discovered their location."

U.S. State Dept. spokeswoman Marie Harf was at a lost for coherency when asked about UNRWA's turning over last week's rockets to "local authorities" and then finding out that Hamas had taken them.

She refused to admit that "local authorities" and Hamas are synonymous.