I had noticed that unlike in previous operations, Arab message boards and social media are not publishing lists and photos of "mujahid martyrs," making it harder to determine how many of the dead in Gaza are terrorists and how many are really civilian.

Now we know why. Hamas told them not to, and to lie and say that every victim is an "innocent civilian."

And the UN, NGOs and world media are regurgitating the Hamas lies.

In light of the recent round of fighting in Gaza, the Hamas interior ministry has issued guidelines to Gaza Strip social media users for reporting events and discussing them with outsiders.

The ministry's guidelines, which it is calling the "Be Aware – Social Media Activist Awareness Campaign," were issued via an instructional video posted on its official website and via posters published on its Twitter and Facebook pages. Both the video and the posters were also posted on the ministry's social media accounts and forums.

Following are excerpts from the guidelines:

Anyone killed or martyred is to be called a civilian from Gaza or Palestine, before we talk about his status in jihad or his military rank. Don't forget to always add 'innocent civilian' or 'innocent citizen' in your description of those killed in Israeli attacks on Gaza. 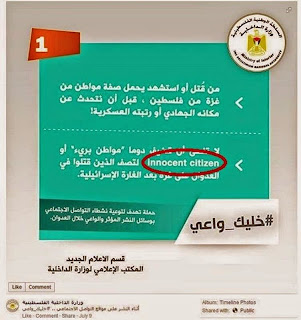 Begin [your reports of] news of resistance actions with the phrase 'In response to the cruel Israeli attack,' and conclude with the phrase 'This many people have been martyred since Israel launched its aggression against Gaza.' Be sure to always perpetuate the principle of 'the role of the occupation is attack, and we in Palestine are fulfilling [the role of] the reaction.'

Beware of spreading rumors from Israeli spokesmen, particularly those that harm the home front. Be wary regarding accepting the occupation's version [of events]. You must always cast doubts on this [version], disprove it, and treat it as false.

Avoid publishing pictures of rockets fired into Israel from [Gaza] city centers. This [would] provide a pretext for attacking residential areas in the Gaza Strip. Do not publish or share photos or video clips showing rocket launching sites or the movement of resistance [forces] in Gaza.

To the administrators of news pages on Facebook: Do not publish close-ups of masked men with heavy weapons, so that your page will not be shut down [by Facebook] on the claim that you are inciting violence. In your coverage, be sure that you say: 'The locally manufactured shells fired by the resistance are a natural response to the Israeli occupation that deliberately fires rockets against civilians in the West Bank and Gaza'..."

Additionally, the interior ministry prepared a series of suggestions specifically for Palestinian activists who speak to Westerners via social media. The ministry emphasizes that conversations with them should be conducted differently from conversations with other Arabs. It stated:

When speaking to the West, you must use political, rational, and persuasive discourse, and avoid emotional discourse aimed at begging for sympathy. There are elements with a conscience in the world; you must maintain contact with them and activate them for the benefit of Palestine. Their role is to shame the occupation and expose its violations.

Avoid entering into a political argument with a Westerner aimed at convincing him that the Holocaust is a lie and deceit; instead, equate it with Israel's crimes against Palestinian civilians.

The narrative of life vs. the narrative of blood: [When speaking] to an Arab friend, start with the number of martyrs. [But when speaking] to a Western friend, start with the number of wounded and dead. Be sure to humanize the Palestinian suffering. Try to paint a picture of the suffering of the civilians in Gaza and the West Bank during the occupation's operations and its bombings of cities and villages.

Do not publish photos of military commanders. Do not mention their names in public, and do not praise their achievements in conversations with foreign friends!

It is clear that most of the Arabic news media, and not just the social media, are adhering to these guidelines perfectly.

These instructions come with an implicit "or else" clause.

See also these posts on the real statistics of deaths from Gaza and how Hamas' websites in English and Arabic give completely different messages.