Why I think the IDF is undercounting rockets launched from Gaza

On Wednesday, I received word from the IDF spokesperson that so far in the current conflict, 106 rockets had fallen short in Gaza. This was after they had released this graphic: 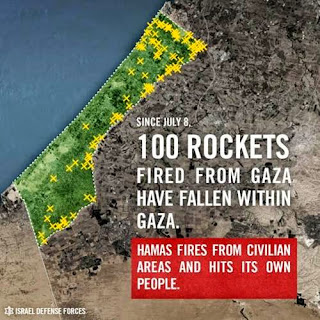 In their daily roundup, the IDF adds detail:

Since the start of the operation:

Over 1350 rocket have been launched at Israel.
1027 of those rockets hit Israel
Approximately 265 rockets were intercepted by the Iron Dome missile defense system.

Unfortunately, these numbers indicate only 58 rockets falling short in Gaza, so I don't know how to explain the difference.

Normally, I trust the IDF. But the Gaza-NSO has been doing these rocket counts for years, and they have no real incentive to exaggerate the numbers.

Moreover, the terrorists themselves are claiming far more rockets being fired than the IDF says, and while they are admittedly terrorists, their statistics seem pretty detailed.

Hamas claims to have shot 1002 rockets so far as of Wednesday. Islamic Jihad claims 864 rockets. Fatah's Al Nidal Brigades averages about 7 rockets a day, and the PRC a few more, and many other smaller groups who join in, so altogether there seem to have been about 2000 rockets fired from Gaza according to the armed groups. This seems roughly what the Gaza-NSO is reporting as well.

I know the Gaza-NSO counts rockets that explode on the launchpad, as well as those that fall short.

The divergence between the two sides is still quite large. My guess is that Israel is mostly only counting rockets that get close enough to the border, or high enough over the horizon, to be registered by Iron Dome radar, and there have been hundreds that simply did not get detected, mostly (I imagine) because Iron Dome is tuned to ignore false positives. The IDF map seems to show far more rockets near the borders than within Gaza, but I don't know if it is showing where rockets are launched from or where they land.

Whether it is 100 rockets that have fallen short in Gaza so far or closer to 800, it is a statistic that is still being roundly ignored by the many foreign correspondents who are in Gaza right now.