At the official launch of two German-funded UNRWA projects in southern Lebanon, Director of UNRWA Affairs in Lebanon, Ann Dismorr, posed with a map that erases the State of Israeland presents all of it as "Palestine."

The map includes both the Palestinian Authority areas as well as all of Israel. Above the map is the Palestinian flag and the inscription "Arab Palestine." The text at the bottom of the map also says "Palestine." The neighboring countries Egypt, Jordan, Syria and Lebanon are all named on the map as is the Mediterranean Sea. Israel is not mentioned or designated anywhere. Several places and cities, both in Israel and from the Palestinian Authority, are included on the map of "Palestine": The Negev desert, Be'er Sheva, Rafah (Gaza), Hebron, Bethlehem, Jerusalem, Jaffa, Haifa, Acre, Tiberias and the Dead Sea.

The map was presented at the launch of an UNRWA project to improve the water supply network and rehabilitate shelters in the Rashidieh Camp, and was a gift from the "Palestinian Women's Union," the Palestinian news site pn-news.net reported. 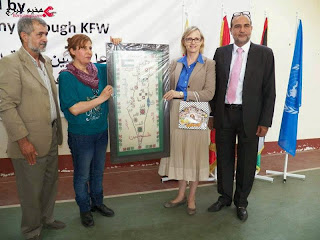 Notice that UNRWA's smiling Ann Dismorr is also carrying a handbag or souvenir bag depicting a Judenrein Jerusalem surrounding the Dome of the Rock, with a decorative keffiyeh pattern that symbolizes "resistance:" 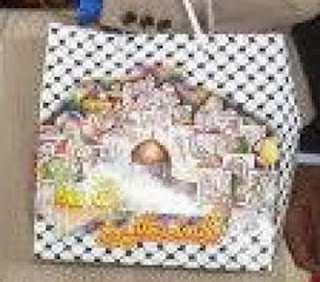 People may want to tweet @UNRWA or go to one of their Facebook pages to ask if this is appropriate behavior for a supposedly non-political organization.

Then again, maybe this is an admission that when UNRWA energetically supports the mythical "right of return," that this map and painting of Jerusalem is what would inevitably result.