Power returns to most homes in coastal city after electrical sub-station flooded overnight; snow falls in northern and central Israel 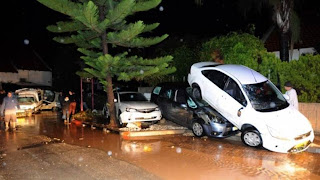 MORE ON THIS STORY

The Israeli Navy was sent into the coastal city of Hadera late Tuesday night to help rescue residents stranded by massive flooding.

Large parts of the city, located approximately halfway between Tel Aviv and Haifa, were left without power when water flooded the local sub-station of the Israel Electric Corporation.

By early Wednesday morning, electricians had restored power to most residents, and authorities said many roads in the city had been reopened.

In the northern Golan Heights, snow began to fall shortly before midnight local time on Tuesday. Several school closures for Wednesday were announced in the area.

Overnight, snow was also reported in the Galilee region and in parts of central Israel.

Earlier Tuesday, soldiers from the Israeli Air Force’s 669 air rescue unit airlifted 15 people who were stranded atop a roof in the northern-western Arab town of Baqa al-Gharbiya after a flash floods surrounded the building.

The 15 were pulled, one by one, into a hovering helicopter as the water level rose and threatened to cover the roof.

Six were evacuated to the nearby Hillel Yaffe Hospital in Hadera due to fears of hypothermia.

Earlier, seven people were rescued by the unit after they became stranded on the roofs of their cars when the Alexander stream, which runs north of the coastal city of Netanya, overflowed and flooded.

In the West Bank, near the Palestinian city of Jenin, Israeli and Palestinian search and security personnel helped rescue a bus with 30 women and children that was stranded in a rising stream.

The Education Ministry has opened a situation room to help get information on school closures out to parents. The hotline number is (02) 622-2211.

Since the weekend, Israel has been experiencing one of its most severe storms of the past 20 years, with strong winds felling trees and heavy rains flooding areas throughout the country. Several train stations along the coast were closed due to flooding, as was the Azrieli mall in the central city of Modi’in.

Roads in the north were temporarily closed after cars were stuck in flood waters. In Kiryat Yam, near Haifa, firefighters extracted a taxi-driver after his cab was stuck in a flooded road.

In the large West Bank settlement of Modi’in Ilit, an overflowing stream overtook a southern neighborhood, trapping residents in their homes. A man trying to cross the negotiate the rising waters was swept downstream and rescued by emergency crews. A boy was also pulled from the water.

In March 2012, heavy rains caused the same stream to swell and a 7-year-old was swept away and drowned.

On Tuesday afternoon, traffic resumed in both directions of Tel Aviv’s main highway, the Ayalon freeway, hours after the road was closed along with other major arteries due to heavy rains that caused waters to rise near road-level.

In the morning, police closed both northbound and southbound lanes of the Ayalon, or Route 20, from the Glilot interchange to the Kibbutz Galuyot exit, spanning the entire length of Israel’s commercial capital.

Harsh weather is expected to continue through Thursday, with snow predicted for higher elevations, including Jerusalem, beginning late Tuesday night.