Jerusalem of white: Snow persists in capital and northern Israel

No school in Jerusalem and in other parts of the country; Route 1 closed between Sakharov Gardens and Ben Shemen 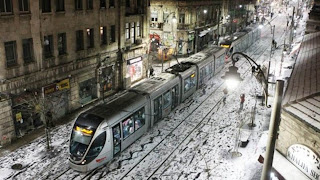 Scattered snow showers continued overnight Wednesday and into Thursday morning in Jerusalem, while northern Israel remained covered in white and many Israelis went without power.

Traffic police shut down Route 1 on Thursday morning between the Ben Shemen interchange and the Sakharov Gardens, at the entrance to the capital, due to dangerous road conditions.

Traffic was being diverted to Route 443, where road conditions were dangerous, as well, reported Walla News.

Sections of Routes 1 and 443, the two main arteries connecting the capital with Tel Aviv and the Gush Dan region, were also shut down on Wednesday due to severe road conditions.

Derech Haminharot, also known as the Tunnels road, remained closed between Jerusalem and Tzur Hadassah. The road is the main connector between the capital and the Gush Etzion settlement bloc to the southeast.

The Jerusalem municipality decided early Thursday that schools and kindergartens would be closed throughout the capital so as not to endanger students.

School was also canceled in the northern Golan Heights, for all areas north of and including the town of Keshet.

Students in Safed, Maalot Tarshiha, and in the Northern Galilee and Merom HaGalil Regional Councils will be staying home, as well.

In the West Bank, school was canceled in the Mateh Binyamin Regional Council, in Elon Moreh, Itamar and Kfar Tapuah, among other areas.

Schools will operate as scheduled in the areas of Tel Aviv and Haifa.

The Education Ministry has opened a situation room to help get information out to parents regarding school closures. The hotline number is (02) 622-2211. 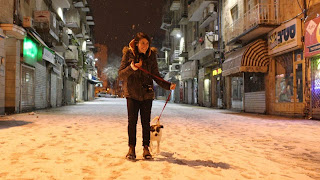 A woman walks her dog on a snow covered street in Jerusalem on Wednesday (photo credit: Nati Shohat/Flash90)

Israel’s biggest storm in 20 years brought freezing temperatures to Jerusalem and parts of northern and central Israel on Wednesday. After days of anticipation, snow began to fall in the capital and the surrounding hills.

The snow is expected to continue into the early afternoon. Egged, the capital’s main bus company, said it would not run its buses in or to Jerusalem, citing dangerous road conditions. It said it would restart service on main roads only at some point before noon.

The city’s light rail will continue to give free rides until 2 p.m. according to operator Citipass.

Elsewhere around the country there was heavy flooding and widespread power outages.

In Petah Tikva, a fatal bus accident, where two pedestrians were killed, was a frightening reminder of how dangerous road conditions have become in parts of the country.