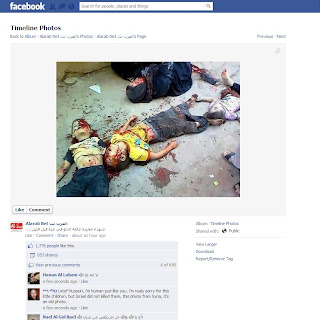 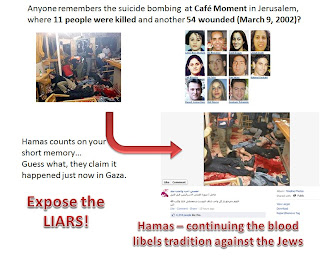 Yet another fake 'Gaza' photo has incited a flurry of comments on Facebook against Israel during the fifth day of Israel's Pillar of Defense operation in the Hamas-controlled Gaza Strip.  An Arab news site called Alarab Net released the photo, which shows a family who was allegedly 'massacred' in Gaza on its Facebook page on Sunday, November 18. The caption in Arabic roughly translates into English as "martyred massacred family in Gaza shortly before…"

Thanks to Tazpit News Agency's investigative work, it was found that the photo had been originally published on a news site based in Dubai, United Arab Emirates called Moheet one month earlier on October 19. On the Moheet website, the photo was titled "Syria killed 122 Friday…Assad Used Cluster Bombs."

Uploaded to Facebook on Sunday evening by Alarab Net, the newly captioned Syrian photo, which depicts three bloodied children and their mother lying on a floor, quickly attracted over 1,200 likes, close to 500 comments and 420 shares within an hour.

Alarab Net appears to be a news website based in Israel that offers a wide range news coverage from pop culture to politics and anti-Israel coverage.

It is not the first time that photos from the Syria massacres have been recycled into Gaza tragedies during the recent rocket escalation. Last week, Hamas's military wing, the Al Qassam Brigades uploaded a photo on their Twitter page of a dead child in his weeping father's arms, which the terror group alleged had happened in Gaza during an IDF strike.

The American news syndicate Breitbart found that the photo was a month old and had originally appeared in a slideshow about the Syrian conflict back in October on the UK Guardian. The photo had in fact been taken in the Dar al Shifa Hospital in Aleppo, Syria.

Hamas's photograph, which had been tweeted as a taunt to  the IDF spokesperson, has now been removed from the terrorist group's Twitter page.

Screenshots of Alarab Net's Facebook page where the images is falsely labelled, and the Moheet website, where the image is labeled as a Syrian tragedy can be viewed below.