I reported last Sunday that Hamas held a major funeral for a five-year old boy killed in Gaza. 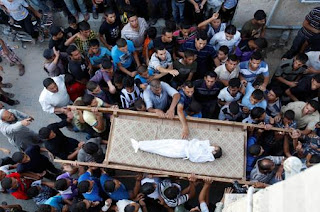 Armed factions also intensified the firing of projectiles, including Grad rockets, at southern Israel...Some of the projectiles dropped short of the Gaza/Israeli border or exploded prematurely, killing a five-year old Palestinian child, and injuring a total of 15 Palestinians.

This is separate from the two-year old girl killed the week before by a Qassam rocket who the Arabic media said was killed by Israel.

Every single Arabic news site reported as a fact that he was killed by an Israeli warplane, and not one of them I could find reported Israel's denials.

If you are an Arabic speaker, there is no way you would know that all those stories were lies (outside of reading OCHA's Arabic report.)

And yet the news media and the leftist hate-Israel sites still quote Gaza officials without any skepticism, even when they are the biggest, provable liars.