Yesterday there was a kerfuffle as Al Jazeera released a report suggesting that Yasir Arafat was killed by Polonium-210, a highly radioactive substance:


Eight years after his death, it remains a mystery exactly what killed the longtime Palestinian leader. Tests conducted in Paris found no obvious traces of poison in Arafat's system. Rumors abound about what might have killed him – cancer, cirrhosis of the liver, even allegations that he was infected with HIV.

A nine-month investigation by Al Jazeera has revealed that none of those rumors were true: Arafat was in good health until he suddenly fell ill on October 12, 2004.

More importantly, tests reveal that Arafat's final personal belongings – his clothes, his toothbrush, even his iconic kaffiyeh – contained abnormal levels of polonium, a rare, highly radioactive element. Those personal effects, which were analyzed at the Institut de Radiophysique in Lausanne, Switzerland, were variously stained with Arafat's blood, sweat, saliva and urine. The tests carried out on those samples suggested that there was a high level of polonium inside his body when he died.

"I can confirm to you that we measured an unexplained, elevated amount of unsupported polonium-210 in the belongings of Mr. Arafat that contained stains of biological fluids," said Dr. Francois Bochud, the director of the institute.

The anti-Israel crowd is loving this, saying it "proves" that Israel assassinated Arafat.

Reuters throws some cold water on the claim:


Darcy Christen, spokesman for the Institut de Radiophysique in Lausanne, Switzerland, told Reuters on Tuesday it had found "surprisingly" high levels of polonium-210 in Arafat's belongings.

But he stressed that clinical symptoms described in Arafat's medical reports were not consistent with polonium-210 and that conclusions could not be drawn as to whether the Palestinian leader was poisoned or not.

Also not mentioned is that Al Jazeera itself once aired accusations that Mahmoud Abbas was part of a conspiracy to assassinate Arafat - and Abbas responded by shutting down the Al Jazeera offices in the West Bank!

Anyway, I had some fun on Twitter about this, because of all the hue and cry over polonium, people seem to have forgotten about a much deadlier element. My tweets:


A rare and dangerous element, that has killed thousands of people, mostly in the Middle East #PLOnium

Outbreaks of #PLOnium almost destroyed both Jordan and Lebanon a while back, but no one seems to remember that

A very unstable element, #PLOnium has been known to blow up airplanes and buses

#PLOnium has been known to even attack athletes, but only those from a single country exactly 40 years ago. Not worth remembering, though.

Despite similarities, #PLOnium does not mix well with its sister element, #Hamasium.

Even with its known dangers, some people like to be close with #PLOnium, thinking that it won't hurt them.

PLOnium is much, much deadlier than polonium, but for some reason people think that it is inert - or even beneficial. And those who note how dangerous it is are outshouted by PLOnium's many supporters, who know it is deadly but think that it only has one target that they want to see killed as well.

PLOnium is especially popular at the UN.

After Yasser Arafat died in 2004, the Palestinian Authority refused to release medical records which would have shed light into the cause of death.

While it was reported that AIDS was a possible cause, as Challah Hu Akbar observed, "conspiracy theories relating to Arafat's death have been around since the beginning."

These have included the accusation that he was poisoned by Polonium 210, the same substance which killed Russian defector Alexander Litvinenko in 2006. The Polonium theory was also advanced, for example, by antisemitic extremist Israel Shamir in 2006.

Interestingly, a report in 2005 by The New York Times (which had access to Arafat's medical records) concluded that he died of "a stroke that resulted from a bleeding disorder caused by an unknown infection," but noted that the "findings argued strongly against poisoning".

However, just yesterday, July 4, Al-Jazeera revived the story, and claimed that the results of "a 9 month investigation" of the death of Arafat "uncovered radioactive polonium on [Arafat's] final belongings," a story which has spread across the web.

Of course, many of us at CiF Watch have been more concerned with the absence of information, in most of the coverage of these "revelations", regarding Arafat's death toll – the casualties resulting from a terrorist war against innocent civilians which he helped to revolutionize.

Arafat's long reign of terror included orchestrating the start of the 2nd Intifada,a four-year campaign of violence which claimed the lives of over 1100 Israelis. (See CAMERA's "Yasir Arafat's Timeline of Terror" for a summary of the terrorist violence the Palestinian leader was responsible for – attacks which date back to the 1960′s.)

So, yesterday, we Tweeted the following which, as of this post, has been ReTweeted 88 times: 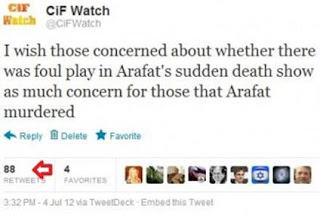 Hopefully, the success of our (under 140 character) observation about the legacy of Arafat indicates that the notoriety of the man (known as "The Father of Modern Terrorism") will not soon be forgotten.