“Abdallah al-Ashaal said that the Zionists were behind the rioting Copts. According to him, Israel is attempting to destroy Egypt from the inside by instigating these disturbances. He claims that at the urging of the Mossad, the Copts are inviting Americans and Zionists into Egypt to protect them and through that to burn and destroy the country.”

At least 22 killed in clashes between Copts and Egyptian security 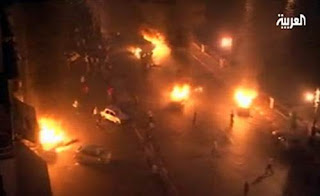 At least 19 people were killed and dozens were wounded as death toll surged in clashes between Coptic Christians and Egyptian security forces on Sunday near the state television building, known as Maspero in Cairo, Egypt’s interior ministry said.

Al Arabiya TV’s correspondent, whose office buildings are in the area, said there was heavy gunfire in the clashes as protesters seized weapons from torched military vehicles. She said she saw bodies outside the building but did not know if they were just wounded.

The clashes were prompted by an attack on a Coptic Christian church in Merinab village in Aswan on Sept. 30 by Muslims who said the church did not have the proper license to build a dome.

State television said the church was attacked after Aswan governor Mustafa al-Seyyed was reported as saying Copts had built it without the required planning permission.

“Down with the marshal,” the demonstrators chanted on the march to Maspero, referring to Field Marshal Hussein Tantawi who took power in February after president Hosni Mubarak’s ouster in the face of mass street protests.

“When we got to the state television building, the army started firing live ammunition,” he said, adding army vehicles ran over protesters, killing five. His account could not be immediately confirmed.

“The army is supposed to be protecting us,” Youssef said.

Here is a graphic photo of four of the dead Christian protesters (from Twitter).