"There's no place for Jews in Libya"

From JPost, in a further followup to this and this:

A few hundred angry protesters gathered in central Tripoli on the eve of Yom Kippur on Friday, calling for the deportation of a Libyan Jew who has been trying to reopen a synagogue sealed since ousted Libyan leader Muammar Gaddafi expelled the country's Jewish community in 1967. 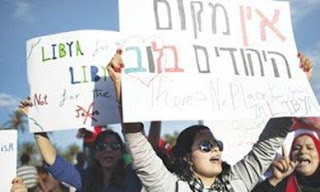 The protesters carried signs reading, "There is no place for the Jews in Libya," and "We don't have a place for Zionism."

The crowds tried to storm Italian Libyan Jewish psychoanalyst David Gerbi's Corinthia Hotel in central Tripoli. There was also a demonstration in Benghazi in the east of the country.

According to Gerbi, the crowd wanted to forcibly remove him from the hotel.

"They were impeded by hotel and Libyan security and government officials," he said.

"The Tripoli crowd dispersed after Allaghi warned that any use of force on the part of the protesters would immediately result in strong international condemnation," Gerbi said.

"He [Allaghi] reassured them the 'problem' would be resolved within 48 hours."

The demonstrations were ignited by an attempt by Dr.Gerbi to clean the debris and pray in Tripoli's abandoned Dar Bishi Synagogue. Dr. Gerbi had joined the National Transitional Council (NTC) rebel group last spring, first as a volunteer at the Benghazi Psychiatric Hospital and then joining and helping the rebels themselves.

"This incident has served to expose the dangerous reality simmering beneath the surface," he said.

On Sunday, after a personal meeting with Libyan and Italian diplomatic representatives, he agreed to return to Rome on Tuesdayby military plane in order to ease the tension.

To me, the most remarkable part of this story is that a protester actually tried to translate "There's no place for Jews in Libya" into Hebrew just for a protest sign.

The poster behind it says "Libya for the Libyans - not for the Jews" with "Jews" crossed out.

And the protesters in this photo are women.