People who want to boycott Israeli goods are invited to print this and carry it with them at all times. 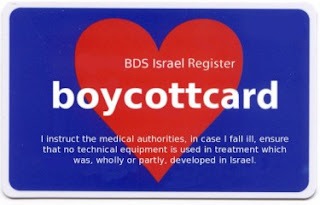 On the back is the fine print:

Israel is a leader in biotechnology development

Israeli company Given Imagining, developed the PillCam for examining the esophagus and digestive tract.

Medical researchers in Israel developed a device that looks like a regular pen, but tests and identifies unwanted substances in bodily fluids