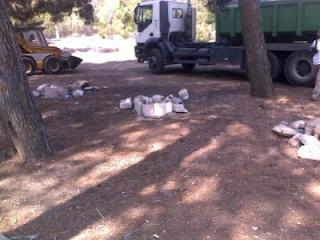 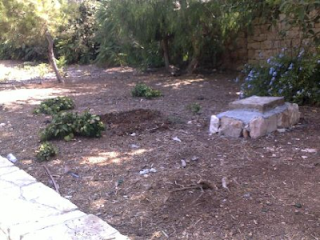 Photos: materials for new tombs after being dumped at the site, and after being shaped into 'tombs'.

In the heart of Jerusalem, dozens of new tombs are being added to an ancient cemetery, but no one is buried beneath them. Jewish observers and sources in the Jerusalem Municipality say the pretend-graves are simply a Muslim project for grabbing land.

The Mamilla Cemetery is located on the outskirts of Jerusalem's Independence Park (Gan HaAtzmaut), between Agron and Hillel Streets. It is an ancient Muslim cemetery containing several dozen graves, which has been in a state of severe disrepair for more than a century, despite being under the supervision of the Muslim Waqf.

In recent days, however, there has been much hustle and bustle in the cemetery, and its seems to be growing from day to day, cutting into land that is a part of Independence Park. Trucks, tractors and other heavy machines come and go, dumping building materials, which workers then shape into Muslim-style tombstones with no one buried beneath them. Dozens of these faux-graves are being created on the eastern end of the park, in row after row, where only bare earth and grassy areas existed until now.

Some of the fake tombs have been completed and others are in the process of being built.

Arutz Sheva's Chezki Ezra visited the site following a tip from a local resident and was surprised to see many dozens of new "tombs." He estimated their number as approaching 100.

Funding from the Gulf?
"They are trying to take over this territory," a municipality gardener said. The Arab workers who dumped stones at the site did not answer Arutz Sheva's questions and made haste to leave instead. Other municipality employees who were at the site confirmed that the construction is a Muslim land grab. Several tombstones were dug up, revealing no ancient graves or even remnants of graves underneath them, they said, adding that the municipality "is aware of the activity" and that it has initiated legal moves against the "tomb planters."

Another worker at the site said that the "tomb planting" project was being financed by a rich Muslim from one of the Gulf states. Yet another employee said that the police "instructed the Muslims to stop their activity immediately" but that they are ignoring that instruction.

Deputy Mayor of Jerusalem David Hadari heard about the matter from Arutz Sheva and was dumbstruck by the news. "I am in a state of total shock," he said. "Arutz Sheva has discovered the naked truth, and I intend to immediately turn to the Municipality Director to make use of all of the municipal enforcement arms so that while honoring the Muslim's deceased, we will not honor Muslim fictions that are simply intended to capture more land in eastern Jerusalem."

MK Nisim Ze'ev (Shas) said the matter was a very serious one. "The Jerusalem Municipality is allowing complete abandonment of territory and assets," he said. "The Arabs are trying to conquer the Land of Israel in every possible way. If we do not wake up to their conniving ways we will find ourselves before a gaping chasm. We need to plow the area and take down all of the fictitious tombs."

The apparent impotence of Jerusalem authorities in the face of brazen Arab land-grabs is also apparent in the matter of a huge wall that has been built around a Turkish cemetery.

The Muslims may be taking advantage of Israeli reluctance to act assertively regarding its land, in the face of pressure from the Obama administration over Jewish construction in Jerusalem, Judea and Samaria, and the razing of illegal Arab structures there.

http://timesofindia.indiatimes.com/world/middle-east/Destroyed-Muslim-graves-in-Jerusalem-were-fake-Israel-/articleshow/6300963.cms
JERUSALEM: Around 300 Muslim gravestones destroyed by Israeli bulldozers in a Jerusalem cemetery earlier this week were "fake" and set up in a bid to snatch government land, the city charged on Thursday.

Earlier this week, the Islamic Movement accused the municipality of razing Muslim graves that had been recently renovated in a centuries-old cemetery located in a large park in mostly Jewish west Jerusalem.

In its first official response to the claims, the Jerusalem city council on Thursday acknowledged it had removed some 300 tombstones but said they were not erected over any human remains.

"The municipality and the (Israel Lands) Authority destroyed around 300 dummy gravestones which were set up illegally in Independence Park on public land.

"The court approved the removal of all the dummy gravestones which were laid in the last seven months," the municipality said in a written statement.

"This is a fraudulent set up, one of the biggest in recent years, whose aim is to illegally take over state land."

Underneath the tombstones excavators found only "plastic bottles, cigarette packets and parts of a sprinkler system," the statement said. It accused "Islamic elements" of trying to pull off a huge scam.

On Tuesday, Mahmud Abu Atta, a spokesman for the Al-Aqsa Foundation which is linked to the Islamic Movement, told AFP that Israeli bulldozers had destroyed some 200 graves in the ancient cemetery at Mamilla.

He said the bulldozers returned later in the day to destroy dozens more after a Jerusalem court rejected a petition to halt the work.

The demolition of the graves took place very close to the site of a planned Museum of Tolerance to be built by the Simon Wiesenthal Center, a US-based Jewish human rights group.

The project has sparked controversy because it is being built on land belonging to the Ma'man Allah cemetery, commonly called Mamilla, which dates from the 12th century and is the resting place of several Sufi saints.

Israel's 1.3 million Arab citizens include the descendants of Palestinians who remained in the Jewish state after the 1948 war that attended its creation.