by Itamar Marcus and Barbara Crook
The host of a program about prisoners on official Palestinian Authority television described Jews as "our enemies" and Israeli soldiers as "wild animals" when she interviewed young children. 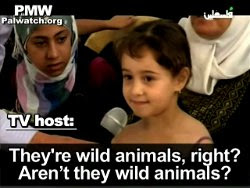 Her comments were made during two recent episodes of the PA TV program For You, which features interviews with the families of Palestinians imprisoned by Israel. In an interview with the young sister of a prisoner serving a 13-month sentence, the PA TV host asked the girl if the Israeli soldiers bother the family when they visit her brother in prison. When the girl agreed, the host added: "They're wild animals, right? Aren't they wild animals?"

In another episode, the same host interviewed the four-year old son of a prisoner serving a 15-year sentence. She asked who imprisoned his father, and the boy answered, "The Jews." As in the other interview, the host prompted the child: "The Jews are our enemies, right?" The boy nodded in response.

It is worth noting that the boy did not say that "Israelis" imprisoned his father, but specified that it was "the Jews."

PMW has not been able to determine what crimes these prisoners committed.

Following are the transcripts of excerpts of the interviews:

Host: "Do they bother you, the Israeli army, the soldiers there [when visiting at the prison]?"
Girl: "Yes."
Host: "They're wild animals, right? Aren't they wild animals?"
[PA TV (Fatah), June 21, 2010]
PA TV host Manal Seif interviews the four-year old son of prisoner Shadi Shbeita, who was sentenced to 15 years in prison: