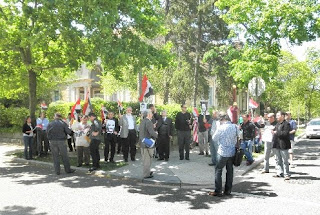 As part of the Obama Administration's ongoing campaign to appease enemies and alienate allies, the President has decided to send an ambassador to Damascus for the first time since 2005. Laura Rozen's Politico report this week on the battle in the Senate over the confirmation of career diplomat Robert Ford to the post led Michael Rubin to observe how weak the argument in favor of sending an ambassador is. "The simple fact is that restoring an ambassador legitimizes Syria and its stonewalling into the investigation surrounding Rafik Hariri's assassination as well as its support for Hezbollah," argues Rubin.

I would add that it has the potential to send a terrible message to dissidents in Syria, which is why the ambassadorship issue was the subject of some angst amongst protestors at the Syrian Embassy in Washington today.

About 50 people showed up for the protest. In between chants of "Down with dictatorship," "Down with terrorism," "Down with Bashar Assad" and "Enough silence" in both English and Arabic, the crowd listened to speeches (about half in English, half in Arabic) by activists with first-hand knowledge of the Assad regime's brutality.

Mohammad al-Abdallah, along with his father Ali, was imprisoned for six months for the crime of "criticizing the state of emergency laws" by the Assad regime. (The "state of emergency" under which the Syrian government justifies its human rights abuses has been officially in place since 1963. Hell of an emergency, huh?) He is pictured above holding an image of his brother Omar, who remains in prison in Syria, serving a five year sentence for things he wrote on his blog. He described how political prisoners are mixed with ordinary criminals, who enjoy harrassing and beating the political prisoners regularly; the prison guards have no interest in stopping this. (Political prisoners are often forced to sleep on the floor while criminals get cots.) Abdallah said he is "not against engagement," but that it must be "conditional engagement" and human rights must be on the agenda.

Ammar Abdulhamid, the Executive Director of the pro-democracy Tharwa Foundation, was much more critical of the Obama Administration's policy (as well as that of French President Nicolas Sarkozy, who recently visited Syria). "Nothing can be gained from engaging tyrants," he said. Abdulhamid noted that the regime that Western governments are attempting to engage does not speak for the Syrian people, saying "the true leaders of Syria are in prison."

"Peace and stability cannot happen at the expense of our freedom," Abdulhamid insisted. He's right of course. I fear that the Obama Administration is determined to learn this lesson the hard way.