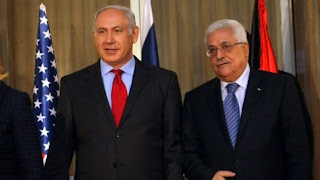 The terminology recognizing Israel’s Jewish character sought by Israel and rejected by the Palestinians during negotiations in recent months was not a blunt acknowledgement of Israel as a Jewish state, but a much more nuanced and gentle formulation, The Times of Israel has learned.

Indeed, Israeli negotiators were willing to work with Palestinian Authority President Mahmoud Abbas and his team on the wording of the desired declaration, towards a formula that would have described the Jewish people’s and the Palestinian people’s right to self-determination in precisely equivalent terms, and would have also included phrases to guarantee the rights of Israel’s Arab minority.

The Palestinians, however, were adamant in refusing to consider the idea.

Prime Minister Benjamin Netanyahu’s insistence that the Palestinians recognize Israel, in some way or another, as the nation-state of the Jewish people was one of the major sticking points as the negotiations limped along. Netanyahu’s dismay at the Palestinian refusal to even consider working toward a formulation on this point may have been one of the factors that led him to announce, in Tel Aviv on Thursday, that he would push for a new Basic Law that would provide “a constitutional anchor for Israel’s status as the national state of the Jewish people.”

In the negotiations, the Israelis proposed a formulation that would acknowledge that both the Jewish people and the Palestinian people mutually recognize each other’s rights to sovereignty in the framework of an agreement that would end all remaining claims. Israel offered to formulate the declaration in terms that would explicitly state that a recognition of the Jewish state does not in any way impact on the status of non-Jewish Israelis, and does not coerce the Palestinians into accepting Israel’s historical narrative.

“The goal of the process was to receive mutual recognition for two nation states, and that both the Jewish people and the Palestinian people have national rights,” a senior government official told The Times of Israel on Thursday. The phrasing proposed by Israeli negotiators was “based on total parity,” this official said.

“We were prepared to be creative with the language, but not the concept,” the official added, asserting that Israel was exceedingly flexible regarding the wording of the intended formulation. The Palestinians, however, resolutely refused to accept the very concept of such recognition, he said, even if it was entirely mutual and included explicit clauses to alleviate their concerns.

Palestinian officials have publicly and repeatedly ruled out recognizing Israel as the nation-state or the homeland of the Jewish people, arguing that meeting such a demand would force them to accept the Zionist narrative, relinquish the right of return and compromise the standing of Arab citizens of Israel.

Justice Minister Tzipi Livni has stressed, however, that asking the Palestinians to recognize Israel as a Jewish state is not aimed at endorsing a particular historical narrative, but seeks to guarantee mutual acceptance of Israeli and Palestinian legitimacy.

The approach proposed by Israel in the negotiation room was designed to assuage all Palestinian concerns. Since the mutual recognition would be contingent on the successful resolution of all other core issues of an agreement, the right of return of Palestinian refugees would no longer be an issue. Furthermore, the rights of Israel’s non-Jewish minority would be guaranteed and Israel was ready to include a sentence stating that the Palestinians would not be forced to co-opt any historical narrative.

The Palestinians refused adamantly to consider Israel’s proposal, and were backed by the Arab League, which at a summit in Kuwait in March expressed “total rejection” of Israel’s demand for recognition as a Jewish state.

“Israel has not missed an opportunity to derail US peace efforts, including raising new demands, such as the demand for recognition as a ‘Jewish state,’ which we have refused to so much as discuss,” Abbas said at the summit.

“President Abbas’s stubborn refusal to discuss mutual recognition between two nation-states stands in stark contrast with Prime Minister Netanyahu’s willingness to recognize a Palestinian state and his agreement that all of the core issues can be raised in the talks,” a senior Israeli official told The Times of Israel at the time.

By clinging to his position, Abbas “could well torpedo the peace process,” the official said then. “He boasted that he refuses to even discuss recognizing the Jewish state, once again parading rejectionism as virtue.”

On Thursday, Netanyahu said that he would advance new legislation in the Knesset to anchor Israel’s status as the nation-state of the Jewish people, warning that opposing such a recognition would eventually undermine the country’s right to exist.

More on this story