Deal failed because Arafat also wanted control of area leading to tunnels, where ‘you could do mayhem to the ruins of the temples’

Former US president Bill Clinton said Wednesday that the Palestinians were offered the Temple Mount at the Camp David Summit in 2000, but the agreement fell through over a sliver of land near the Western Wall.

In an address at Georgetown University in Washington DC, where he has agreed to deliver a series of lectures, Clinton spoke on a variety of domestic issues, while also touching on the foreign policy challenges his administration had encountered — chiefly, the Israeli-Palestinian conflict and the 2000 summit he brokered between then-prime minister Ehud Barak and the late Palestinian Authority leader Yasser Arafat.

Clinton’s remarks revealed that a breakthrough in talks between Israel and the Palestinians, particularly on the controversial issue of the division of Jerusalem, was closer at hand in 2000, at the summit he called a “roaring success,” than previously thought.

Israel, he said, agreed to hand the Palestinians control of the Temple Mount, the holiest site in Judaism and the compound where al-Aqsa Mosque is situated, on the condition that the area around the Western Wall remain under Israel’s control.

Arafat agreed to leave Israel with control over the Western Wall, as well as over the Jewish neighborhoods in East Jerusalem, but insisted on keeping 16 meters, or 50 feet, of land leading up to an entrance to the Western Wall tunnels under Palestinian control.

Israel refused, on the grounds that the tunnel granted access to remains of the Jewish temples. In retrospect, Clinton said, Israel was probably justified in its refusal, as “if you got in, you could do mayhem to the ruins of the temples.” 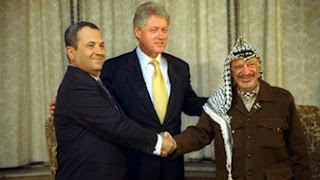 The parties ultimately failed to reach agreement on Jerusalem and the Temple Mount, along with a slew of other critical issues.

Reflecting on his Middle East negotiation efforts as president immediately preceding the Second Intifada, Clinton asked, ”Did we fail? You tell me, In the four years after I left office, three times as many Palestinians and Israelis were killed in violent acts than in the eight years I was there. We always need to get caught trying — fewer people will die.”

“Somehow you have to find a way to establish trust among adversaries,” Clinton said of the 2000 summit. “Agreement is not nearly as important as trust.”

Clinton also spoke of his involvement in the signing of the 1995 Oslo II Accords, which divided the West Bank into three administrative divisions. He said the experience could be seen as an example for negotiators and mediators. In a conflict situation, he said, the two sides must learn to work together and trust each other rather than rely on outside mediation.

He said that mere weeks after that agreement was signed, former prime minister Yitzhak Rabin — whose word Arafat said he valued more than a piece of paper — was assassinated by an “angry settler” who, the former president added, is still revered in the West Bank today. He was referring to Rabin’s assassin, Yigal Amir, who was not a resident of a West Bank settlement.

It’s been “thirteen years and counting,” Clinton said, since Arafat urged him to facilitate a peace agreement with Israel — thirteen years in which political changes occurred in both Israel and the Palestinian Authority, and the minutiae of a potential peace deal — including security arrangements in the West Bank and the division of the Old City of Jerusalem — were discussed in “excruciating detail” and for the most part “pretty much agreed on.”

However, Clinton said, no agreement was reached under his aegis because although Israel, under Barak, agreed to give up 96 percent of the West Bank, the Palestinians, under Arafat, “never said yes.”