How Hamas used the weather to defame Israel 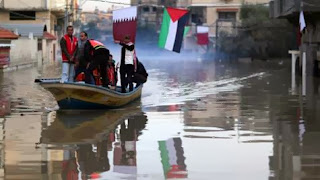 Even the weather is fair game in Hamas’s war of words against Israel. A fabricated claim that Israel intentionally flooded the Gaza Strip during the worst storm to hit the region in decades has made headlines in Middle Eastern and international media over the past week.

The Gaza Strip was one of the areas most affected by the storm Alexa. Torrential rain caused widespread flooding, forcing some 40,000 residents to evacuate their homes as rescuers used rowboats to assist stranded civilians. UNRWA, a UN agency tasked with assisting Palestinian refugees, described parts of northern Gaza Strip as a disaster zone.

Rainfall of 260 millimeters (10.23 inches) was documented in the Gaza area between December 11 and 13, comprising a staggering 60 percent of the annual average for the region. According to Israel’s Water Authority, the flow in Shikma River — emanating in the Hebron hills and pouring into the Mediterranean Sea north of the Gaza Strip — broke a 50-year record.

But force majeure would not suffice for Gaza’s Hamas authorities as an explanation for the population’s suffering. Hamas’s Disaster Response Committee chairman Yasser Shanti told journalists on Friday that Israel opened dams just east of the Gaza Strip, causing a flood in the area of Moghraqa near the town of Deir El-Balah.

A variation on that claim was made by Civil Defense spokesman Muhammad Al-Maidana, who told the Palestinian daily Al-Quds that Israel had opened sewage canals east of the Gaza Strip, “exacerbating the crisis and raising the water level, causing homes to be submerged.”

Al-Majd, a Palestinian security-oriented website, went so far as to claim that Israel opened the dams in order to expose Hamas tunnels leading into Israel and impose an unbearable financial burden on Gaza’s government. “For Gaza to drown is an old Zionist dream,” the site wrote in a report.

“The allegation of [Israel] opening dams and flooding the Gaza Strip is baseless and false,” Uri Schor, a spokesman for Israel’s Water Authority told The Times of Israel in an email correspondence Wednesday. No dams even exist in the area, he added, noting that water reservoirs have overflowed across the country, causing flooding.

“The opposite is true: due to the damage caused by the storm — which affected all neighboring countries and not only the Palestinian Authority — Israel responded to a special appeal conveyed through the UN, transferring four high-power pumps to the Gaza Strip intended to help residents remove water from flooded areas.”