"He was the Rabbi of the Tekoa settlement... worked vigorously towards a peaceful solution for the Israeli-Palestinian conflict... founder of the peace movement, 'Land of Peace,' whose members are both settlers and Palestinians."

Rabbi Menachem Froman of the Israeli town of Tekoa in the West Bank passed away a week ago. The Palestinian Authority daily newspaper seldom prints positive articles about Israelis and almost never portrays those they call "settlers" in a positive light. However, the PA daily recently published a very positive article on its front page about Rabbi Menachem Froman and his efforts to promote peace between Israelis and Palestinians. The article was originally published by Agence France-Presse.

In 2010, the official PA daily reported on a solidarity visit by Rabbi Froman to mosques in the West Bank.

Palestinian Media Watch documents instances in which the PA portrays Israel in a positive light.

The following is the article from the official PA daily:

"Yesterday, well-known Israeli Rabbi Menachem Froman, who maintained friendships with Palestinian officials, passed away at the age of 68 after a long battle with the [cancer] disease - as reported by the Israeli media.

Menachem Froman was born in 1945 in Mandatory Palestine. He was the Rabbi of the Tekoa settlement located in the southern part of the occupied West Bank and worked vigorously towards a peaceful solution for the Israeli-Palestinian conflict.

According to Rabbi Froman, the Jewish and Muslim spiritual leaders are the most appropriate people to find a solution which will lead to peace, since this conflict has a religious nature.

Based on this view, he maintained ties with PLO leaders, specifically with historical leader Yasser Arafat, and also met with leaders of the Hamas movement.

Froman is the founder of the peace movement, Land of Peace, whose members are both settlers and Palestinians. He criticized the violations committed by the most extreme settlers against Palestinian targets, and visited a few vandalized mosques to express solidarity.

Rabbi Froman used to stress that he is willing to live in a Palestinian state in the event that Jewish settlements in the West Bank would be evacuated.

Froman, who fell ill with a type of cancer, hoped to 'be capable of contributing to peace until his final breath.'"

When we went to speak to President Mahmoud Abbas last month, Menachem Froman told him: I look forward to being a citizen of the State of Palestine. Abu Mazen responded that he looked forward to giving him a Palestinian passport. 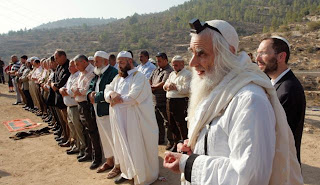 I was one of the many thousands of people who came to pay respect to you. Like most of them, I felt a special connection to you. One of your children said over your grave that probably most of us who were there felt that we were the most special person for you. I can’t speak for the others, but I can tell you that I felt from you that our connection was most special and dear to you, as it was to me.

I was not amongst your flock of students nor among the many young people who admired you beyond words. Your words to them, your piercing look into each one of their pair of eyes, the movement of your hands and your body, your soul, which you shared so generously with all, touched them and they loved you, as you loved them. I was not one of them. I told you, more than once in our many soul-to-soul conversations that I was not a believer; I did not share your deep, unrelenting faith and your love of God, which I do not believe in.

Our paths merged over and over again because of our common love of humanity and our deep attachment to the people of Israel, the land of Israel and the State of Israel. Both of us also shared the deep conviction that all of the people living on this land are entitled to enjoy freedom and peace. The first and second times we met I know you don’t recall. In 1982 I drove you in my car from Tel Aviv to Jerusalem after a demonstration against the war in Lebanon. My car was full and we had a very lively political conversation the whole way home. You sat in the back seat and prayed the whole time (was my driving so bad?), you didn’t say a word. You were a most curious character for me and I wanted to speak to you, but we didn’t get the chance.

The next time I met you was more than ten years later in Gaza in the office of the person you called “your brother Abu Yusef”. General Nasser Yusef was the commander of the Palestinian security forces. We met by chance in his office. How strange it was for me to see you in Gaza, in that place with those people. But it was not strange for you. You reached out and with your wisdom, your insights, your manner, your faith – you touched everyone, and they trusted and respected you.

The next time we spoke was more than ten years after that, in 2006. Gilad Shalit was abducted and was being held in Gaza. You were using all of your contacts to reach out to the people holding him. Somehow you heard that that I too had contacts with the Hamas leadership and that I was also trying to find a way to bring Gilad home to his family and country. It always amazed me that even though we came from such different worlds, our thinking converged and we found unison in common cause and strategy. When finally in 2011 my secret back channel with Hamas became official and Prime Minister Benjamin Netanyahu gave the green light for it, there were three people I wanted to share that news with – Aviva and Noam Shalit, and you. But I couldn’t. Netanyahu conditioned the secret channel on it remaining totally secret. But you were in my thoughts.

About half a year ago, I published my version of a peace plan with the Palestinians. Your son, Sivi showed it to you. And once again you reached out to me because once again we shared common cause and common thinking. We talked, or I should say, you talked (I listened) for hours. I have to confess, there were times when you called when I didn’t answer. I knew if Menachem is calling, I need at least one hour for the call. I apologize for that but I did usually call you back. In between prayers and study, medical treatment and horrible body pain, you found the time for us to share our thoughts, and to find ways to translate our common dreams into a real practical game plan.

The last time we met, about one month ago, was when we together went to speak to President Mahmoud Abbas. You were weak and in pain, but the meeting and working for peace gave you strength. And you spoke for about one hour. And President Abbas listened and responded. He had admiration in his eyes for you and appreciation for your love of humanity and your dream to see peace before you left this world. You told Abu Mazen that you look forward to being a citizen of the State of Palestine, living in your home in Tekoa. Abu Mazen responded that he looked forward to giving you a Palestinian passport.

You always told me that I have the soul of a believer, of a religious and spiritual man. You would quote from the sages, from the Torah and from the Zohar and say that it all applied to me. But it didn’t really matter to you that I didn’t share your faith, you said you felt it inside of me nonetheless.

It was an honor for me to know you. I am privileged for having the chance to be part of your life. The world is a better place because of you even if you did not fulfill your life’s dream to see peace with your own eyes. I and others will keep that dream alive and we will fulfill it. Peace on this land will be a reality and when it happens, memories of you will come alive and you will share in the wonders of the dawn of the age of peace in our land. May you rest in peace my dear brother Reb Menachem Froman.

Dr. Gershon Baskin is the Co-Chairman of IPCRI, the Israel Palestine Center for Research and Information, a columnist for the Jerusalem Post and the initiator and negotiator of the secret back channel for the release of Gilad Shalit.