Prime Minister Binyamin Netanyahu's Likud Beytenu list did even worse in Tuesday's election than public opinion polls predicted last week, winning 31 seats according to exit polls on three television networks and only 29 in a Smith Research exit poll conducted for The Jerusalem Post. 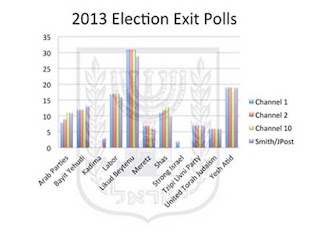 Netanyahu attempted to make the best of the results, saying he viewed them as an endorsement of his leadership and vowing to immediately start working on forming a coalition that would include parties on the Right, Left, and Center. He immediately called Yesh Atid leader Yair Lapid, who won an unexpected 18-19 seats, and asked him to cooperate with him in his next government.

But other officials in Likud said in closed conversations that Netanyahu had proven that he was no longer king of Israel, as he had been crowned by Time Magazine. They said he could expect a challenge to his leadership in the Likud.

Yesh Atid will be the second-largest party in the Knesset according to the polls, and apparently the second-largest in the coalition. Likud officials said Lapid could be a possible foreign minister if the Finance portfolio is given to Liberman. The Education portfolio could end up going to Lapid's No. 2., Rabbi Shai Piron, who runs a non-profit organization focusing on education.

Labor leader Shelly Yacimovich called on Lapid not to join a Netanyahu government and to instead join her in trying to form an alternative coalition focusing on socioeconomic issues. Yesh Atid officials said they would not hurry to make a decision.

One of the biggest losers in the race was the Tzipi Livni Party, which the exit polls predict would win only six or seven seats, far short of providing an alternative to Likud-Beytenu, as Livni promised. She vowed to remain in politics and said she was glad that the Center-Left had grown.

But Labor's No. 2, MK Isaac Herzog, blasted Livni, saying that if she would have accepted overtures from Yacimovich to join Labor, the party could have won more than 30 seats and formed the next government.

Lapid ruled out entering the coalition without another Center-Left party during the campaign. If Kadima does not pass the threshold, as the TV exit polls indicated, the most likely coalition is seen as Likud-Beytenu, Yesh Atid, Bayit Yehudi, Shas, and the Tzipi Livni Party.

The Shas triumvirate was divided over whether it could sit in a coalition with Yesh Atid. While Deri called for Netanyahu to form a national-unity government with Labor, rather than with Yesh Atid, Eli Yishai answered affirmatively without hesitation.

"If Lapid wants to sit in a stable government that will make compromises, we can sit with him," Yishai said. "If he wants to continue with political spin, it won't happen."

The turnout in the election was higher than expected, in part because of sunny weather. The central elections committee said turnout was 66.6%, numbering some 3,767,000 people, an increased over the 64.7% of the 2009 election.

The high turnout raised the minimum number of votes needed to cross the two percent electoral threshold. The television exit polls indicated that neither Kadima, nor Strong Israel would cross the threshold.

If Kadima does not make it into the Knesset, it would be a historic downfall for a party that won 28 seats in 2009 and formed the government in 2006.

One of the big winners was Meretz, which doubled in size from three seats in 2009 to six or seven, according to the exit polls.

If the exit polls hold true, more than half of the MKs who served over the past four years will not be coming back.

“Mazal tov to the Israeli people on their just completed elections! Always inspiring to see democracy in action!” he wrote. He later posted that the United States “looks forward to working closely with next government of Israel.”

“Israel demonstrated once again that it is the only flourishing democracy in the Middle East,” he said.

Engel went on to congratulate Netanyahu for his firstplace finish but said that the “US Congress stands shoulder to shoulder with the State of Israel” across its political spectrum.

He added, “We in Congress will always defend Israel. This commitment is ironclad, a pledge made by Democrats and Republicans alike.”