The SS-headache of Carlos Latuff

Among “pro-Palestinian” activists, the cartoonist Carlos Latuff is a widely admired artist.  Like most of his fans, Latuff expresses his support for the Palestinian cause with an intense hatred for Israel, which is reflected in his large output of images comparing Israel to Nazi Germany. Unsurprisingly, Latuff’s achievements also include a winning entry for the 2006 Iranian “International Holocaust Cartoon Contest.”

The fact that comparisons between Israel and Nazi Germany are generally regarded as antisemitic doesn’t seem to bother Latuff and his fans – quite the contrary: for them, it’s apparently just another reason for ridicule and amusement.

This flippant reaction was well illustrated when Latuff responded to his inclusion in a list of this past year’s “Top Ten Anti-Israel/Anti-Semitic Slurs” compiled by the Simon Wiesenthal Center. Tweeting his “Thanks to Rabbi Marvin Hier and @simonwiesenthal for the award for my toons on #Gaza slaughter,” Latuff attached a cartoon depicting himself being “awarded” a third-place medal by Rabbi Marvin Hier of the Wiesenthal Center. 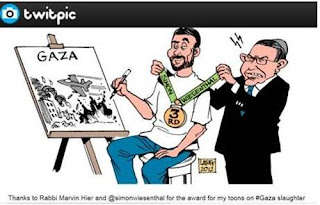 As you can see in the screenshot of Latuff’s cartoon above, there is an unmistakable SS-symbol next to Rabbi Hier’s head. When I noted this in a tweet, Latuff quickly responded, claiming that I was wrong and that the “bolts are cartoon representation of headache.” To support his claim, he linked to the following picture: 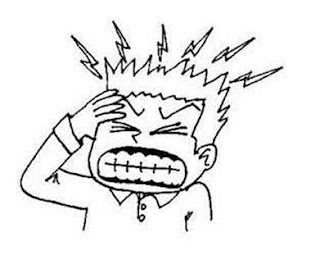 For comparison, here is the SS-symbol: 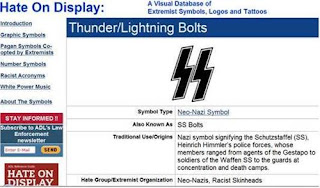 Since Latuff immediately blocked me, he didn’t have to face up and respond to the evidence showing just how flimsy his “headache”-explanation looked.

After all, for somebody like Latuff who works with images, it is hardly credible to claim that he was unaware of the obvious SS-reference in this cartoon. How about this very similar “headache” in an undeniably antisemitic cartoon from 2006?

It is also noteworthy that Latuff didn’t link to any of his own images to illustrate his claim that an SS-symbol look-alike was a common cartoon representation of a headache. But his claim is most severely undermined by the fact – illustrated here – that he has made it something of a specialty to work Nazi-symbolism into his cartoons relating to Israel. He now has only himself to blame if it seems that this has become second nature to him.