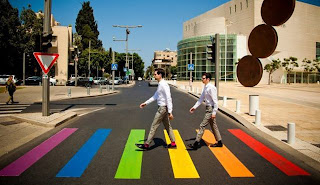 In publicity stunt meant to generate buzz ahead of Gay Pride Parade, city hall paints a crosswalk in rainbow colors, then paints it white again.

The Tel Aviv municipality provoked public ire this week when, in a bid to advertise Gay Pride Day, it painted a city-center crosswalk in rainbow colors and posted photos of the stunt on Facebook – only to repaint it white a few hours later.

The municipality launched its advertising campaign ahead of next month's Gay Pride Parade on Tuesday. As part of its campaign, it posted a photo on its Facebook page of a crosswalk on central Rothschild Boulevard, near the Habima national theater, painted in the colors of the rainbow.

In a press release distributed with the photo to the media, city hall explained, "Pictured in the photo are members of the electronic group TYP: Ivri Lider and Johnny Goldstein, and it corresponds with the famous picture from the album Abbey Road by the Beatles." The statement added that the band is scheduled to headline the Gay Pride Parade's main concert on June 8.

The photo elicited hundreds of delighted comments and 'likes' on Facebook, and some people wrote that they planned to head to the area to take pictures of the unique sight.

One commenter called the move "populist, cheap and devoid of content," adding that if the paint job was never meant to be permanent, city hall could have just as easily created the image in Photoshop, thus saving public funds.

"This is so typical of the municipality – who cares about reality over the long term, what matters is that there's a colorful, pretty picture on Facebook," wrote another.

Yonatan Levi, one of the leaders of last summer's social protest movement, which set up its first tent camp on the very same corner, wrote, "This morning municipal workers painted a crosswalk next to Habima in the colors of the rainbow, ahead of Gay Pride events in the city. Two hours later, after they photographed it from every angle, the municipality changed the stripes back to their boring former state. It's time that everyone realize: that's how [Tel Aviv Mayor] Ron Huldai sees us – as extras in an advertisement."

In response, city hall explained that, despite its good intentions, the law did not allow it to leave the crosswalk permanently painted in rainbow colors.

"Unfortunately, we cannot legally leave the crosswalk painted in non-standard colors. But we have a wonderful memento," the city wrote.