It generally reflects the media bias against Israel in the same countries surveyed, and that disproportionately negative coverage is the engine driving these results. People's  attitudes reflect their exposure to information, and if the information is bad, their opinions would follow suit.

"Israel among countries with most negative global influence"

The BBC published a new Globescan poll and, as usual, most news media are misunderstanding it.

Ha'aretz gets it almost right but is still not quite there: 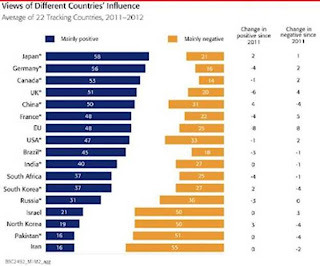 Israel has been ranked in the top four countries that most negatively influence the word, according to a global public opinion poll conducted by the BBC.

The poll, which surveyed citizens from 22 countries around the world, places Iran in first place, with 55 percent of those surveyed rating it as a negative country. Pakistan ranked second with 51 percent, and in joint third place were Israel and North Korea, with 50 percent of respondents negatively evaluating both countries.

The broad international survey was an initiative of the BBC World Service, and carried out by GlobeScan, in collaboration with the the Center for International and Security Studies at the University of Maryland – Program on International Policy Attitudes. Over 24,000 people from 22 countries took part in the poll, which was conducted from December 2011 to February 2012.

The survey’s findings on global attitudes toward Israel are worrying indeed. Last year’s survey already that attitudes toward Israel were negative, but the situation has become more serious this year: Some 47 percent of participants in the 2011 survey had negative views of Israel’s influence on the world, but this year the number has gone up to 50 percent.

The problem with the articles about this is that they don't notice the countries that are not in the survey.

Only 16 countries, plus the EU, were subjects of the survey. No Arab countries were asked about. Neither was Turkey.

Only two Muslim countries were in the questionnaire - and both of them were at the bottom (Iran and Pakistan.)

Fifty per cent of Americans have a favourable view of Israel in 2012, and this proportion has increased by seven points. At the same time, the proportion of negative ratings has gone down six points to 35 per cent and, as a result, the US has gone from being divided in 2011 to leaning positive in 2012. These are the most positive views on Israel’s influence expressed in the US since tracking began in 2005. Apart from the US, the most favourable views of Israel are found in Nigeria and Kenya, where views have also shifted since 2011. A majority of 54 per cent of Nigerians (up 23 points) rates Israel positively, and the country has moved from being divided to leaning positive in 2012 (54% positive vs 29% negative). In Kenya, negative ratings have fallen ten points (to 31%), while positive views have risen by 16 points (to 45%), shifting the country from leaning negative in 2011 to leaning positive in 2012.

At least YNet didn't repeat last year's mistake when reporting on this poll.

This is not to say that the poll isn't worrying. It generally reflects the media bias against Israel in the same countries surveyed, and that disproportionately negative coverage is the engine driving these results. People's  attitudes reflect their exposure to information, and if the information is bad, their opinions would follow suit.

Here are the main results for countries' attitudes towards Israel's influence in graphical format. 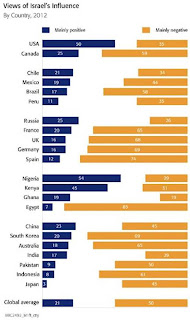