"We have never allowed ourselves to knead [the dough for] the bread that breaks the fast in the holy month of Ramadan with children's blood," he said. "Whoever wants a more thorough explanation, let him ask what used to happen to some children in Europe, whose blood was mixed in with the dough of the [Jewish] holy bread."
"Great God, is this a religion?" he asked. "Is this what God would want? God will deal with you yet for what you are doing."

The rally was called to protest the planned Mughrabi bridge construction in Jerusalem's Old City. Addressing the 1,000-strong crowd and assembled press, Salah accused Israel of attempting to rebuild the Jewish Temple on the Temple Mount while drenched in Arab blood.
"Whoever wants to build a house of God should not do so while our blood is still on his clothes, on his doorposts, in his food, in his drink, being passed along from one terrorist general to the next terrorist general," he said.

A party in London to celebrate an anti-semite

From the Daily Mail last week:

A Palestinian activist, who was allowed to enter Britain despite being banned on the grounds he might incite racial hatred, has won an appeal to stay.

Sheikh Raed Salah, 53, leader of the Islamic Movement in Israel, arrived at Heathrow Airport on June 25. An investigation revealed Border officials had missed six chances to stop him entering the country.

He was arrested at his hotel three days later at which point Home Secretary Theresa May served a deportation notice saying his presence in the UK was 'not conducive to the public good'.

However after being released on curfew, Mr Salah, a Palestinian with Israeli citizenship, launched a legal battle against moves to expel him and a tribunal has now found in his favour.

During a two-day hearing - in which he sought damages for unlawful detention - the High Court was told how Mr Salah had intended to stay in the country for 10 days to attend meetings and public engagements.

His legal team claimed he had not been aware of the ban, had entered the country with a passport issued in his name and had made 'no attempt' to conceal his identity.

His arrest had followed an appeal by the Mike Freer, Conservative MP for Finchley and Golders Green, who asked the Home Secretary in Parliament that Salah be banned because of his 'history of virulent anti-semitism'.

He said: 'I have been questioning the propriety of providing a platform to a speaker who reportedly peddles the conspiracy theories of Jewish involvement in the 9/11 plots.'

Campaigners insisted he was the leader of a legitimate political organisation and rejected all forms of racism.

As I have noted over the years, Salah is a lying anti-semite who is constantly inciting violence. He has even pushed the classic blood libel that Jews use children's blood to make matzoh.

So of course London's Muslims and apologists for terror celebrated his court victory:

Following a fraught 10 month legal battle against the British Home Secretary, Sheikh Raed Salah's friends, supporters and campaigners bid him a fond farewell during a congratulatory function in London yesterday. He was greeted by a packed hall of over 350 people, and entered to the congratulatory cheers of the attendees celebrating his victory against the Home Office's deportation order issued in June last year. 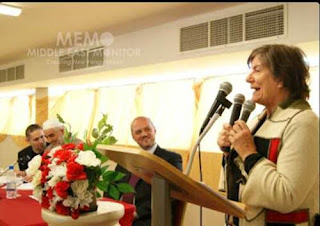 Chaired by Anas al-Tikriti of the Cordoba Foundation, a number of speakers were welcomed on stage to congratulate Sheikh Raed on his significant victory. Sheikh Raed himself was unable to address the crowd due to existing bail conditions which had not been removed by the Home Office. Among the speakers was Baroness Jenny Tonge, who chaired Sheikh Raed's first meeting in parliament last June. She thanked him for his continued struggle and expressed her sorrow at the actions of the British Government.

Ismail Patel, Chair of Friends of al-Aqsa, spoke of the strength and conviction that Sheikh Raed had held throughout his ordeal and described the inspiration that he had provided, by encouraging all to continue the battle even when the battle seemed to be defeating them. Yet, it was this perseverance by Sheikh Raed and his supporters which ensured that he was ultimately victorious. Perhaps the most poignant words of the event came from Dr Mohammed Badie, Supreme Guide of Egypt's Muslim Brotherhood, direct from Cairo by phone, when he congratulated Sheikh Raed on his victory. 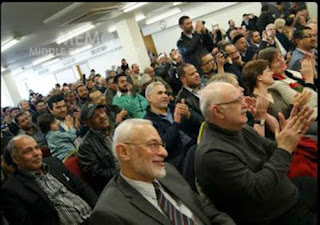 It is very telling to see who unabashedly celebrates a Jew-hating terror supporter in England. (There are well over 100 photos of the event, I'm sure that the British observers can identify many of these people.) 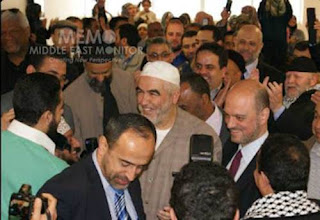