100th anniversary of a pogrom in Fez, Morocco

Today is the 100th anniversary of a particularly gruesome pogrom in Fez, Morocco, as a protest against the French turned into a violent rampage against the Jews who lived in a ghetto there.

From the Boston Evening Transcript: 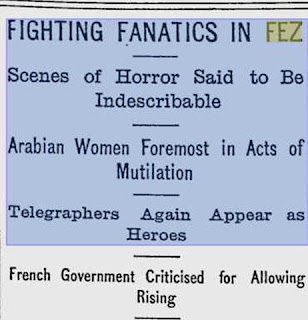 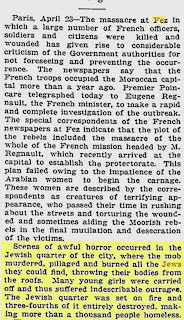 From the Grey River Argus: 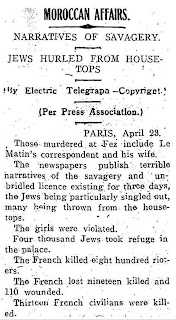 Here is what the Jewish quarter looked like afterwards: 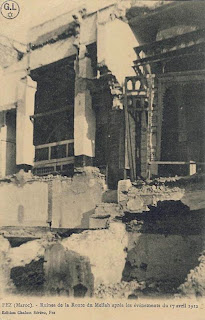 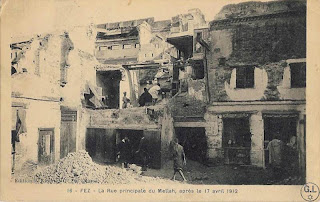 In the end, some 60 Jews were murdered.

And this was not particularly unusual for Fez.  There were pogroms in 1033, and 1276, in 1465 the mellah (ghetto) was almost completely destroyed, and there were pogroms throughout Morocco in 1790 where the Fez Jews were forced out of the city for two years.

This is just a small part of how well Jews were treated in Muslim countries. For the most part better than Europe, but they were always considered to be inferior and apart from the majority population, and when bad things happened the Jews were the first to be attacked.

One hundred years since the pogrom of Fez

While much of the western world has been marking the 100th anniversary of the sinking of the Titanic, another tragedy is being quietly commemorated this week by Jews from Morocco. It is 100 years since a terrible pogrom devastated the Jewish quarter, or mellah, of Fez.

Just as the Jews of Iraq have the Farhud, the Jews of Fez have a name for their pogrom: the Tritl – literally ‘sack’ of Fez. The irony was that theTritl broke out as Jews had finished celebrating their Mimouna, a convivial end to Passover when they invite their Muslim neighbours into their homes for mouffleta pancakes.

Two weeks after Morocco became a French Protectorate on 30 March 1912, Muslim army recruits, outraged at the takeover of the infidel, mutinied against their French officers. Egged on by women standing on the rooftops, the soldiers are said to have played football with the officers’ decapitated heads and decorated their chests with their victims’ intestines. In no time at all, the cry went up, “To the mellah!”

The French having previously confiscated all weapons, the Jews had no means to defend themselves. Looters broke doors down and stole jewellery, furniture, crockery, dishes and clothes. They desecrated synagogues and burnt Torah scrolls. Men, women and children were murdered in cold blood, hurled from roofs, mutilated and raped.

Sultana Elbaz was killed at an upstairs window. She was hit in the chest by a bullet fired by a soldier who had burst into the courtyard of her home. It is said that her baby survived by suckling her blood.

Escaping through a new gate from the mellah, Jews sought sanctuary in the medina, where some Arabs sheltered them. The Sultan Moulay Hafid took many starving Jews into his palace and sent them bread and olives. All the time the refugees remained there, until 28 April, it did not stop raining.

The abiding image of the 1912 Tritl is of Jews sheltering in the sultan’s menagerie. One photo shows the sultan’s lions and tigers in one cage, and Jews crammed cheek by jowl in the adjoining cage. So many Jews streamed into the palace that even the animal cages, the historical accounts suggest, had to be emptied for them. But the Jews had more than a passing familiarity with the beasts: the historian Nathan Weinstock writes that as degraded ‘dhimmis’, it was the Jews’ chore to feed the royal lions and tigers. He even met a man who knew a man who bore a scar on his face from one of these big cats.

On 19 April, in order to force the rioters away, French soldiers fired rockets and bombs, laying waste to much of the mellah. Jews abandoned the mellah, which was pillaged the next day.

During the three days of violence, 45 Jews were killed, although some estimates are higher. Over 70 were injured. French troops suffered an equal number of casualties, while almost 1,000 Muslims were killed or wounded. A third of the mellah was destroyed, and 12,000 Jews found themselves homeless.

In his report of the terrible events of Fez, the director of the local Alliance Israelite school, Amram Elmaleh, wrote: ‘the mellah looks as if ravaged by the worst cataclysm. Each visit I make renders me touched by the misery of these wretches, prostrated in painful silence, staring at the ruins of their humble dwellings…”

Elmaleh was one of the 14-member rehabilitation commission tasked with distributing food aid to the survivors and eventually getting them back on their feet. It was only in September 1916 that the Jewish community finally received some compensation.

The Fez pogrom was not the first to befall the Jews – there had been a Berber attack the previous year on the Jewish quarter, and many others before that on various Jewish communities. The Tritl underlines the fact that the Jews in pre-colonial North Africa had neither material nor physical security. The era of the French protectorate ushered in a more stable period, but few Moroccan Jews managed to acquire French citizenship; 340 Jews from Fez were reported to have left for Palestine in 1922 alone. There would have been more if each emigrant had not been forced to deposit a guarantee of 1,000 Francs.

Over 200,000 Moroccan Jews have come to Israel since 1948. They constitute the second largest wave of immigration after the Soviet aliyah. In spite of the sultan’s long and honourable record of protecting his Jews, it is said that the trauma of the Fez Tritl is seared into the collective memory, and constitutes the primary reason why Jews left independent Morocco in such numbers.

The Fez Tritl will be commemorated from 16 to 18 April with a conference at the Ben Zvi Institute and at Bar Ilan University and a lecture at the Centre de Recherche Francais in Jerusalem.