Last week I noted a new book in Arabic that claimed that Jews were forced out of Iraq by Iraqis who were colluding with Zionists. Because of this collusion, the Iraqis took away the rights of Jews and eventually forced them out,

As nutty as that was, Mahmoud Abbas' idea of history is even more filled with lies.

He wrote an article in Ma'an two weeks ago, translated now by MEMRI, where he claims there was a Zionist-British-Iraqi conspiracy to expel the Jews. He further claims that Iraqi Jews had no desire to leave the country but a Zionist terror spree in Iraq convinced them to go.

We've seen these bizarre conspiracy theories before, and they have been debunked thoroughly. Here is another opportunity to show that Mahmoud Abbas is a liar.

Here is how the American Jewish Yearbook contemporaneously described life for Jews in Iraq before Israel was declared a state:

Iraq's position at the crossroads of Russian and Western influences made her the target for conflicting propaganda from Russian sources on the one hand, and American and British on the other. Whenever these cross-currents resulted in student demonstrations, strikes or even the fall of a government, as in January, 1948, the Jews were the first to be endangered by the restless elements.

As a result of the growing economic discrimination against Jews, a number of them emigrated from Iraq, and many went to Palestine, usually illegally. The Arab League boycott of "Zionist goods," in which Iraq had already distinguished itself in 1946, furnished a ready pretext for commercial discrimination. The boycott was against all goods coming from and via Palestine. Typical of the stupidly blind fanaticism was a case reported in October, 1947, when Swiss goods arriving in Baghdad by an airplane which had landed at a Palestinian airport were confiscated and burned at once.

When the UN partition decision was announced, a storm broke out in Iraq as in all other Arab states. Nevertheless, the Iraqi government did not allow any serious bloodshed or pillage to develop. It contented itself with nonviolent economic pressure. To protect Iraqi Jews, Chief Rabbi Sassoon Kedmi of Baghdad was compelled to declare to the Iraqi press the "complete solidarity of Iraqi Jews with other Iraqis in the denunciation of Zionism and in their determination to continue living in brotherly Iraq, as they have lived for hundreds of years."

However, the fury had been let loose. After December 1, 1947, no Jews were permitted to leave Iraq, and those who had not yet left could not now escape. At first the Iraqi assault on local Jewry was financial, Jews being forced to contribute large sums to the fighting fund for the Palestinian Arabs. From January to May, 1948, life in Iraq was extremely unpleasant. Anti-Jewish feeling ran high, especially as Iraqi troops were defeated and the Arab refugees began arriving from Palestine. However, there was an outward calm. There were no pogroms in Iraq then, at least none that received any publicity abroad.

The storm really broke on May 15. Then, Jews were treated in Iraq as enemies within the gate, spies, agents provocateurs. Iraqi Jewry's only hope for the future lay in emigration.

When Iraq joined the other Arab nations in the war against Israel in May, 1948, the antagonism and bitterness, which had been stored up against the Jews of Iraq during the six months that followed the United Nations decision to partition Palestine, found an outlet. There were demonstrations by angered mobs and riots in some of the smaller towns in Iraq which resulted in some loss of life and damage to property. But for the most part Iraqi Jewry suffered from forms of official persecution, such as travel restrictions, dismissal of Jewish government officials, excessive taxation, and "voluntary contributions" to "general welfare" causes.

All Jews were classed as enemy aliens, and all Zionist activities were characterized as treason. Imposing martial law, the government embarked on a program of searching Jewish homes "for illegal weapons," since, under martial law, arrests or searches could be made on the sole basis of suspicion. Many Iraqis found this a convenient way of settling long-standing personal feuds with their Jewish neighbors. All in all, 310 Jews were arrested in Bagdad alone during the initial period of the war; about half of these were released after questioning, and the rest were held for trial. Similar acts occurred in other towns and villages.

The anti-Jewish repressions also served as a lucrative source of income for the government, which imposed heavy fines upon arrested Jews, thus replenishing its treasury and helping to finance the cost of the war. In addition, the government requisitioned buildings owned by the Jewish community, as well as some Jewish-owned private buildings, to house Arab refugees from Palestine. The sequestration of Jewish property and business, and blackmail, official and unofficial, proved profitable undertakings. The Jews found themselves forced to become the heaviest contributors to government campaigns for funds to continue the war and to provide for the Arab refugees, as the alternative to being branded enemies, Zionists, Communists, or spies. Thus, the wave of arrests of wealthy Jews was especially productive financially. The dismissal of almost all Jewish officials from government jobs, to "insure the better guarding of state secrets," proved of benefit to the large number of Iraqi Moslems who replaced them. Jews were also prohibited from enrolling in government schools of higher education.

The anti-Jewish persecutions reached their height with the arrest and execution of Shafiq Ades, an Iraqi Jew, on the charge of dealing with the enemy by selling arms to Israel. Surplus material which Ades had purchased two years previously from the British army was found in Palestine during the fighting. Ades claimed that he had sold the equipment to Italy. Because Ades threatened to expose several Moslem high government officials as having been involved in the deal, his trial was held behind closed doors. He was convicted in September, 1948, and his hanging in the public square in Basra was followed by the confiscation of his property, officially valued at $20,000,000. The execution of Ades was a shock to most Iraqis, Jews and non-Jews alike, because he had never associated himself with the Jewish community or contributed to its institutions.

No Jew was spared in the outburst of Iraqi antagonism, not even Chief Rabbi Sassoon Kadourie, who was arrested in October, 1948, allegedly for having, in the course of his Yom Kippur sermon in the synagogue, exhorted the Jews to "acts contrary to the safety of the state."

Contrary to Abbas' claims, there was persecution against Iraqi Jews before Israel; Iraqi Jews risked their lives to make aliyah before Israel was declared; the Iraqi government was the only party behind the decision to expel their Jews and grab their property; the Jews who said that they were anti-Zionist were often forced to say that in order to keep their jobs or money (and even then it did not help them.)

I also would like to call attention to an AP article written during the first phase of the Iraqi exodus, that shows that many Jews were anxious to leave Iraq and go to Israel: 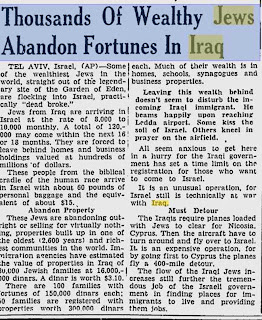