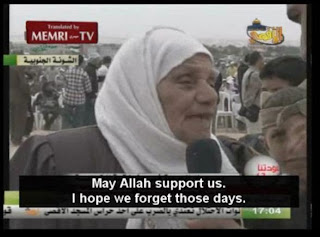 Following are excerpts from an interview with Sara Jaber, a 92-year-old Palestinian who participated in a Right of Return demonstration on the Jordanian-Israeli border. The interview was aired on Hamas' Al-Aqsa TV on May 13, 2011.

To view this clip on MEMRI TV, visit http://www.memritv.org/clip/en/2929.htm.

Interviewer: "Please tell us who you are."

Sara Jaber: "I am from Hebron. The Jaber family."

Interviewer: "What is your name?"

Interviewer: "How old are you?"

Interviewer: "What does this day mean to you? You have lived 63 years since the Nakba. You have experienced the entire Nakba..."

Interviewer: "Thank you very much."

The riots began in earnest, however, on the morning of Saturday, August 24. Arabs killed 64 to 67 Jews in Hebron and wounded many others. Babies were beheaded. Old rabbis were castrated. There were incidents of rape, torture and mutilation. Hands and fingers were torn off bodies, apparently for jewelry.

Cafferata and the Jewish policeman shot at the rioters and killed 8 of them. The Arab policemen fired in the air. Cafferata called for reinforcements, but these arrived only about noon, five hours later. The British had a total of 292 police in Palestine and were busy dealing with disturbances elsewhere presumably. Cafferata, not a friend of the Jews, testified:

"On hearing screams in a room I went up a sort of tunnel passage and saw an Arab in the act of cutting off a child's head with a sword. He had already hit him and was having another cut, but on seeing me he tried to aim the stroke at me, but missed; he was practically on the muzzle of my rifle. I shot him low in the groin. Behind him was a Jewish woman smothered in blood with a man I recognized as a[n Arab] police constable named Issa Sherif from Jaffa in mufti. He was standing over the woman with a dagger in his hand. He saw me and bolted into a room close by and tried to shut me out-shouting in Arabic, "Your Honor, I am a policeman." ... I got into the room and shot him."

About 435 Jews survived by hiding with their Arab neighbors. They were hidden by 28 families who risked their lives to save the Jews.