Both sides in Egypt blame...the Jews!

http://elderofziyon.blogspot.com/2011/02/both-sides-in-egypt-blamethe-jews.html
George Soros, in a ridiculous op-ed in today's Washington Post, blames Israel (actually, the "Jewish lobby") for being the major obstacle to Egyptian democracy.


The main stumbling block is Israel. ... Israel is unlikely to recognize its own best interests because the change is too sudden and carries too many risks. And some U.S. supporters of Israel are more rigid and ideological than Israelis themselves.

He is not the only one.

Many of the protesters hate Mubarak because of....Israel:


The International Network for Rights and Development said that three Israeli planes landed at Cairo's Mina International Airport on Saturday, carrying equipment for use in dispersing and suppressing large crowds, a Press TV correspondent reported.

According to the report, Egyptian security forces received the cargo on three Israeli planes, which were allegedly carrying a large supply of internationally proscribed gas to disperse crowds.

Of course, the Mubarak regime cannot take this ultimate insult lying down.


A young Egyptian woman claims that the Mossad trained her to assist in bringing down Egyptian President Hosni Mubarak's regime. In an interview with Egypt's Al Mehwar network the woman, who noted that her facebook page was extremely popular, said that she was sent by an American organization to be specially trained "by Israelis and Jews" in Qatar. 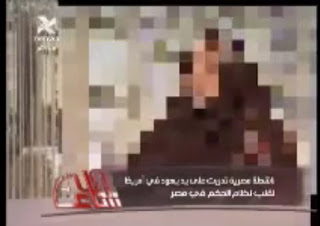 The woman remained anonymous and was interviewed with her voice distorted and her face blurred. She told of her training and financial support from an American organization called Freedom House. She claims that her trainers were Jews and Israelis whose main job was recruiting "young and unexperienced" students from universities.

The organization is well known, and its website states that its purpose is to "support the expansion of freedom around the world" and that it was founded by "prominent Americans concerned with the mounting threats to peace and democracy".

According to the young woman, after her initial recruitment, she was sent to Doha in Qatar with a group of other young people for the next stage in the process. "We received intensive training for four days. The trainers had different citizenships but a predominant number among them were Israelis," she said.

At the end of the interview the woman was asked what led her to confess her secret activities. At this point, she burst into tears and answered that President Mubarak was "like a father to me," which is why she decided to share what happened to her.

I'm fairly sure the Arabic interview is here.

No matter what happens anywhere in the Arab world, you will never have to look hard to find people falling over themselves to blame - the Jews.
~~~~~~~~~~~~~~~
Israeli conspiracy theories-for Egypt unrest-begin to spread
Mai El-Wakil

On Wednesday night, the Egyptian satellite TV station al-Mehwar broadcast a live interview with Shaimaa, a former journalist, who claimed to be trained by Jews in the US to destabilize the political regime in Egypt. Shaimaa said on air that many of the anti-Mubarak protesters at Tahrir Square have received similar training and have been applying it over the past week through organized demonstrations.

Rumors about Israel being the mastermind behind the Egyptian uprising spread on al-Qasr al-Aini Street. This morning, a pharmacist on the street claimed to have seen Egyptian troops arresting two Israelis at Tahrir demonstrations.

Close to al-Qasr al-Aini Hospital, a juice seller refused to sell water bottles to two Al-Masry Al-Youm reporters, who wanted to deliver them with medical supplies to the injured at Tahrir Square. "Israelis are killing our children and destroying our lives. I will take no part in supporting them," he exclaimed.

Nevertheless, it remains unclear how many Egyptians truly believe that Israel constitutes the mastermind behind recent events.

Sherif Younis, a historian, attributes the dissemination of the rumors to a group of National Security Services members, secret police, NDP members, businessmen and media agencies—both government-owned and self-claimed independents--whose interests are tied to the existing political regime.

Some of these groups might have been previously critical of the regime. "Times of uprisings are nevertheless, critical ones and people need to clearly decide which camp they support," said Younis.

"With anti-Mubarak protestors' success in demolishing the security apparatus last Friday, many institutions sided with the regime," Younis said.

Various tactics were developed to turn the public against the uprising. Some newspapers praised the demonstrators for achieving so much progress toward democracy. This was however, immediately followed by a quick condemnation of violence and chaos with the anti-Mubarak protestors taking the blame.  This approach was even used by President Mubarak, according to Younis.

The media has been spreading a culture of fear among the Egyptian public, highlighting events of vandalism, looting and violence due to the absence of security forces. "Protect Egypt" has become a recurring slogan across various TV stations.

Last week, the Muslim Brotherhood was accused of organizing the protests. When this narrative failed to gain popular support, the recurring scenario of Israel emerged, said Younis.

For decades, Israel has been blamed as the root cause of all evil in Egypt. Despite the 1979 peace accords, the public continues to perceive it as a "symbol of evil or even Satan," explained Younis. Egyptian media has been nurturing this narrative for years, with Egyptian cinema and TV showing Israelis as villains in various scenarios regardless of the genre of the movie.

Conspiracy theories are commonly accepted in Egypt, Younis said. Accusations of conspiring with Israel are common among opposition parties as well as the regime, he adds. The allegation was even used during sectarian strife earlier this year.

In his first official comments on the uprising in Egypt, Israeli Prime Minister Benjamin Netanyahu stated last Sunday that Israel is "anxiously monitoring" the anti-government protests. The Israeli government has also been actively advocating Western governments to support political stability in Egypt to preserve Israel's security.

"The uprising is a threat and the regime needs to justify its actions during the last ten days," said Younis. Therefore, the regime sent its supporters to Tahrir Square to clash with the anti-Mubarak demonstrators. The government has announced casualties on both sides and has been emphasizing calls for Jihad at Tahrir, he adds.

Some people are unfortunately buying into this due to a certain level of naivety or due to discomfort caused by protestors and the paralysis of the country, according to Younis. He believes the poor have come to accept the status quo and fear change and are mainly concerned with feeding their families as they have no stable income.

"Israeli-phobia" has become a characteristic of Egyptian national identity, which the state has been building over the past decades, said Younis.

Peaceful relations with Israel remain unacceptable to the majority of the Egyptian public, something acknowledged by the Israeli government in wikileaks documents released last year to the Jerusalem Post. Despite Israel's unpopularity in Egypt, however, the Mubarak's regime has remained one of its main supporters.