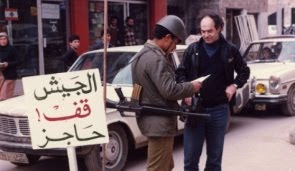 Israel officials call report by Dutch director George Sluizer a 'modern blood libel' after he director claimed to have seen then Defense Minster shooting children from close range near the Sabra-Shatilla refugee camp in 1982.
http://www.haaretz.com/news/diplomacy-defense/i-saw-ariel-sharon-murder-2-palestinian-toddlers-in-lebanon-1.325540
By Cnaan Liphshiz

The claim first appeared in the Volkskrant, the third largest paper in the Netherlands, in an interview with the well-known Dutch-Jewish director George Sluizer. According to Sluizer, 78, he witnessed Sharon killing two Palestinian toddlers with a pistol in 1982 near the refugee camp Sabra-Shatilla while filming a documentary there.

"I met Sharon and saw him kill two children before my eyes," said Sluizer, who lives in Amsterdam. Sluizer has made several documentaries about the Israeli-Palestinian conflict, but is best known for directing The Vanishing with Jeff Bridges and Kiefer Sutherland in 1992.

Sluizer repeated the accusation in an interview for Vrij Nederland, an intellectual magazine, published on November 13 ahead of a screening of his film at the prestigious International Documentary Film Festival Amsterdam. "Sharon shot two children like you shoot rabbits, in front of my eyes," he said.

The children, according to Sluizer, "were toddlers, two or three years old. He shot them from a distance of 10 meters with a pistol that he carried. I was very close to him." Sluizer added he thought this happened in November, when Sharon was Israel's minister of defense, but he was not sure of the month.

His account was published in a special Volkskrant supplement for the film festival, which opened on Wednesday. The festival featured Sluizer's fourth and most recent film about Israel, in which he is filmed telling a Sharon effigy that he wished Sharon would have died at Auschwitz.

Sharon's successor as defense minister, Moshe Arens, said Sluizer's account was "a lie." According to Arens, "Sharon would never shoot a child and he was not in Lebanon in November of 1982. Thirdly, protocol prohibits ministers from wearing weapons. As civilians they are not allowed to carry firearms."

Amram Mitzna, former chairman of the Israeli Labor Party who served under Sharon as head of the Syrian front during the First Lebanon War, called Sluizer's account "total nonsense." Mitzna added: "I attacked Sharon politically over his decisions, but Sharon would never do a thing like that. It's completely ridiculous."

Yossef Levy, senior spokesperson for the Israeli Ministry of Foreign Affairs, called Sluizer's account a "crude and disgraceful lie. It is hard to believe that any reasonable person would take seriously this kind of modern blood libel, which is not supported by a single shred of evidence."

In an interview for Haaretz, Sluizer said his cameraman Fred van Kuyk, who died a few years ago, also witnessed the shooting. Sluizer also said he had personally filed two complaints against Sharon in 1983, with the International Court of Justice in the Hague and the European Court of Human Right in Strasbourg.

Mr. Andrey Poskakukhin, head of the ICJ's information department, said the court had no registration of a complaint by Sluizer. An administrator for the court in Strasbourg said his institution had no record of such a complaint either.

"Any serious newspaper should be very careful in accusing a man who cannot defend himself of committing cold-blooded murder," said Ronny Naftaniel, director of the Center for Information and Documentation on Israel. He has written to Volkskrant's editor-in-chief to ask if the paper had tried to corroborate Sluizer's account before publication.

"Both papers seem to have published Sluizer's account without fact-checking it," Naftaniel also said. "It seems media tend to believe everything negative about Israel, not bothering to even check with their correspondents. In so doing, they are lending themselves to an anti-Israel witch hunt."

Mischa Cohen, who interviewed Sluizer for Vrij Nederland, said he had "tried to corroborate Sluizer's account" to the best of his ability. "There were some inconsistencies, but the article is mostly about Sluizer's anger" in relations to Israel's treatment of Palestinians.

"By the time my complaints arrived at their destination and should have been processed, minister of defense Sharon had become prime minister and therefore he was free of prosecution," Sluizer said. Sharon became prime minister in 2001, 18 years after Sluizer said he filed his complaints. Sluizer says he never received a reply from either institution.

"I was busy doing other things then, finishing filming and traveling the Soviet Union and other countries," Sluizer said when asked why he had not pursued the matter. He added he began thinking more about the shooting after surviving a near-fatal aneurism in 2007.