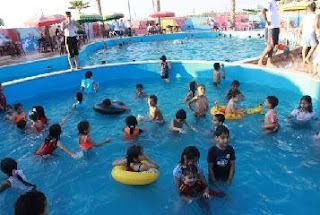 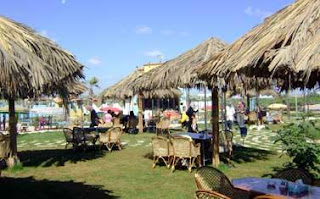 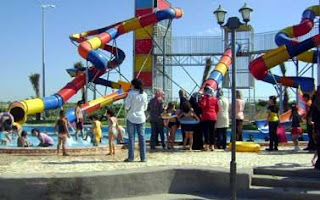 Photos: Al-Ahram, Egypt, July 17, 2010 / Paldf.net, July 21, 2010 /  Fpnp.net, July 21, 2010
"Before I judge by appearances, which can be misleading... [I would like to point out that] I toured the new resorts, most of which are quite grand, as well as the commercial markets, to verify my hypothesis. The resorts and markets have come to symbolize prosperity, and prove that the siege is formal or political, not economic. The reality [in Gaza] proves that the siege was broken even before Israel's crime against the ships of the Freedom Flotilla in late May; everything already was coming into the Gaza Strip from Egypt. If this weren't the case, businessmen would not have been able to build so many resorts in under four months."
En meer feiten en observaties uit Gaza die de media hier helaas niet halen omdat ze niet in het beeld passen van Israel als onderdrukker van een wanhopige bevolking die niks te eten heeft. NB: dit komt uit de Egyptische krant Al-Ahram, niet bekend om zijn pro-Israel berichtgeving.
RP
-------------

In an article in the Egyptian daily Al-Ahram on the economic situation in the Gaza Strip, journalist Ashraf Abu Al-Houl wrote about the burgeoning recreation industry and of the low merchandise prices.

Also as part of the interest in the economic situation in Gaza, the PA daily Al-Hayat Al-Jadida published articles describing the expensive resorts that have been established for Gaza's newly rich, and a Palestinian website reported on the new mall recently opened in the city.

The following are excerpts from the articles:

Journalist Ashraf Abu Al-Houl wrote in Al-Ahram: "I was last in Gaza in mid-February. Returning three weeks ago, I found it almost unrecognizable... and the greatest surprise was the nature of that change. I would have expected a change for the worse, considering the blockade – but the opposite was the case; it seemed as if it had emerged from the blockade.

"A sense of absolute prosperity prevails, as manifested by the grand resorts along and near Gaza's coast. Further, the sight of the merchandise and luxuries filling the Gaza shops amazed me. Merchandise is sold more cheaply than in Egypt, although most of it is from the Egyptian market, and there are added shipping costs and costs for smuggling it via the tunnels – so that it could be expected to be more expensive.

"Before I judge by appearances, which can be misleading... [I would like to point out that] I toured the new resorts, most of which are quite grand, as well as the commercial markets, to verify my hypothesis. The resorts and markets have come to symbolize prosperity, and prove that the siege is formal or political, not economic. The reality [in Gaza] proves that the siege was broken even before Israel's crime against the ships of the Freedom Flotilla in late May; everything already was coming into the Gaza Strip from Egypt. If this weren't the case, businessmen would not have been able to build so many resorts in under four months."

"[I] began my search for the truth regarding the siege in Rafah, at the Saturday market, which was loaded with large quantities of merchandise and products of various kinds – at prices mostly lower than in Egypt, particularly for food products. Nevertheless, there weren't many customers, and this for two reasons: One, supply is much greater than demand, and two, the workers were all waiting to get paid their wages.

"Business owner Abu Yousuf stood at his shop surrounded by hundreds of cans of food. Their price had dropped significantly in the past two months; in some cases by as much as 50%. Clothing vendor Abu Muhammad Al-Masri noted that there was an unprecedented glut on the clothing market in the Gaza Strip. Clothing comes into Gaza from two sources: the tunnels, which provide large quantities, and the border crossings to Israel, via which even more goods arrive, most of which piled up at Ashdod port [and are now coming into the Strip]. He clarified that the merchants wanted to sell [lots of] goods to get back some of their money... and so had increased the supply in the markets, leading to lower prices.

"During my tour of the Rafah and Khan Younis markets, I noticed that the merchants were drastically marking down their merchandise, so as to get rid of goods smuggled in through the tunnels, and to prevent heavy losses... after Israel has decided to allow in Israeli and imported goods, as part of Israeli government measures to ease the blockade following the Freedom Flotilla massacre.

"Despite the drop in price due to the plethora of goods in the Gaza markets, the residents sense that even lower prices are on the way, due to the easing of the Israeli blockade. The consumers are carefully watching prices, [particularly for] smuggled electrical appliances and cars, and refrain from buying, expecting that merchandise will arrive via the border crossings [leading to a further drop in prices].

"A Gaza car showroom salesman said that he hoped to sell off his inventory and that he was not bringing in any new vehicles for fear of heavy losses, because Israel had decided to allow vehicles into Gaza for the first time since 2006. Anyone walking in the Gaza streets will see hundreds, if not thousands, of cars that entered Gaza from Egypt via the tunnels, and some of them are stolen. At the home and kitchen appliance dealers, there is a tempting array of all kinds of smuggled goods that sellers want to get rid of, due to the ongoing information about new products that Israel has decided to allow into to the city... "

Resorts for the Nouveau Riche

"The Gaza resorts paint a picture of prosperity enjoyed by only a few groups, most of which have become rich from the blockade, because they either own tunnels or else work for the many international organizations in Gaza, headed by UNRWA.

"The Gaza resorts are divided into several [categories], each of which has its own price range. This is not like it used to be, when all the tables on the beach were for the use of all the residents... I noticed that most of the resorts set a certain price for the tables near the sea, and a different price for tables farther away. This is in addition to high fees to enter the resort – no less than NIS 20 – and each activity within the [grounds] has its own fee. In short, a family visit, with a sandwich for each child, can cost up to NIS 500.

"Several months ago, Gaza had only one luxury resort, Zahrat Al-Madain. Today, another one opens up every day, such as Crazy Water, Aqua Park, and Al-Bustan. Most of them are owned by members, or associates, of Hamas. In addition, the Hamas municipalities [also] charge high fees, in Gaza terms, for the use of public beaches."

"'Aed Yaghi, senior official of the Al-Mubadara Al-Wataniyya party, which is headed by Palestinian Legislative Council member Mustafa Al-Barghouti, said, 'These resorts make you wonder. It is logical to invest when times are good – but when Gaza is suffering under siege and there is a possibility of renewed aggression [by Israel], no one knows what profitability there is in building resorts.'

"Walid Al-'Awwad, a member of the Palestinian People's Party political bureau, said, 'In the past two years, money-laundering has flourished in Gaza, as reflected by the construction of numerous resorts – all of which belong to influential individuals who participate in trafficking via the tunnels. Compared to the tunnel owners' increasing wealth, the [status] of the [established] wealthy families has waned... The spread of the grand resorts reflects the emergence of a bourgeoisie. Some of the fluidity in the Gaza market stems from the activity of clandestine elements – distributors of drugs, arms, and tunnel merchandise.'

"Human rights activist and political correspondent Mustafa Ibrahim said, 'Building resorts in the north [of the Strip] is contrary to the most fundamental principles of investment, because they are in regions exposed to shelling and destruction, due to the unceasing Israeli threats. Thus, veteran investors don't dare invest in this area. The elements behind the investment [in the north], who are sometimes hasty, rely on profits from trafficking via the tunnels for funding... This huge investment in the leisure industry is taking place today in Gaza at a time when 80% of the residents depend on aid from UNRWA and other organizations, and unemployment is at 45%. This creates a distorted picture, particularly when merchandise is piling up in the shops in a way that does not reflect the economic situation. Perhaps the current government created this distorted situation in order to show that it had succeeded in breaking the siege..." [1]

The PA daily Al-Hayat Al-Jadida stated: "The Al-Bustan resort, on the coast, belongs to an Islamic association linked to Hamas. It offers a cafeteria, a restaurant, and fish ponds; it gets 1,000 visitors a day, and about 2,000 during the weekend, says manager Ahmad Qadoura. A Gaza resident whose home was destroyed in the Gaza war, Abu Kamal Al-Awajeh, expressed his resentment over the resorts' high entry fee of NIS 35... He says, 'priority should be given to rehabilitating Gaza and building housing for those whose homes were destroyed by the occupation in the war.' Nearby, the Wa'ed prisoners' association, which is close to Hamas, has built the Al-Hurriya ["Freedom"] Resort.

"In May, Bisan Tourism City was established in Beit Lahiya, in the northern Gaza Strip. Previously a garbage dump, the 270-dunam [site], which belongs to the Hamas government, provides a leisure and vacation [destination] for Gaza residents... It cost $1.5 million, under the oversight of Hamas Interior Minister Fathi Hammad. The city includes an 86-dunam park and a small zoo, and two Olympic-size swimming pools for children and adults. According to its administration, on weekends it hosts some 6,000 visitors... The administration bans hookah smoking and card games, and three religious conventions are held there every week."[2]

The Palestinian website Firas Press reported: "This week, Gaza's first mall opened. The inaugural ceremony was attended by Hamas ministers and officials, along with merchants and investors. Hamas Welfare Minister Ahmad Al-Kurd said, "The mall will participate in meeting the basic needs of the population, against the backdrop of the siege, with merchants bringing in [goods] via the border crossings and the tunnels."[3]