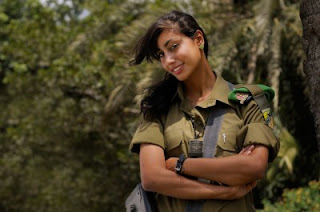 As part of a new feature here at Israel Politik, we are proud to launch "Faces of the IDF," where every week we will showcase a different Israeli soldier and their unique story.

As a "citizen army," Israel's defense forces are a reflection of the country's multi-ethnic population -  and more than that, comprises a complete cross-section of Israeli society. Male and female, rich and poor, gay and straight, black and white and everything in between. In short, everyone who makes Israeli society what it is today serves together as they live together in everyday life.

While this is nothing out of the ordinary for Israelis, the following story really is making waves. And that is the story of Corporal Eleanor Joseph, the first female Arab paratrooper.

Corporal Joseph, an Israeli-Arab born in Haifa, always saw herself in the IDF.  Recalling an incident in which Katyusha rockets were launched by Hezbollah, which caused casualties in her Arab neighborhood, Eleanor realized "if someone tells me that the service in the IDF is just killing Arabs, I remind them that Arabs are killing Arabs."

And so, Eleanor signed up to become a member of Israel's elite Karakal Unit – a dedicated combat unit comprised of men and women serving together – in order to protect Israel's 7 million Jewish, Christian, and Muslim citizens

The road to completing paratrooper training is long and difficult; it requires great endurance, stamina, and integrity.  Many who start do not finish.  But Corporal Joseph was determined to succeed because "ultimately, [Israel] will always be my home too," she says and adds that despite the conflict and difficulties, hope still exists:  "I still believe there will be peace, and belief creates reality."

To read more of her inspiring journey, click here (in Hebrew)