The language of Hamas

A media war over Gaza is running in parallel to the shooting and diplomatic wars. 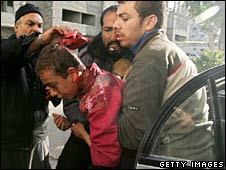 In a previous article I looked at how the Israelis have been very active in getting their arguments over, including their use of online websites and and, in one example, at how video they presented had been challenged. The Israelis have also banned foreign correspondents from entering Gaza.

The Israeli assessment continues to be that, in this conflict, Israel has had much more understanding around the world for its actions, though incidents such as the attack on the UN school on Wednesday have had an effect on that support.

But Hamas, too, must be subject to examination. The use of propaganda by Hamas differs in that it is more broad-brush.

The Israeli effort tends to operate on two levels - it deploys arguments to justify its strategy and tactics but it also gets into detail on individual cases, such as the attack on the school in Gaza on Wednesday.

Hamas often relies on generalised statements. It routinely denies claims against it, such as hiding weapons in mosques or using schools or even ambulances as cover. It sometimes acts as if there was a greater truth to be put over, which goes beyond the detail of some contested incident.

Take the school tragedy. To Israeli claims that Hamas gunmen were operating from there (including, the Israelis said, two fighters whom they named), Hamas spokesman Fauzi Barhoum (supported, it has to be said, by UN officials) made a denial, but did not stop there.

"These are barbaric accusations. There was no fire of any kind from the school by the resistance," he said. This denial of Hamas then became a launch pad for an accusation about Israel's intentions towards civilians. Hamas turned defence into attack. Mr Barhoum went on: "The Zionist occupier wants to kill as many civilians as possible. The school is marked by the UN flag and the Israelis are just trying to justify this ugly crime."

If that accusation were literally true, Israel could in fact kill any number it wants. But the Hamas statement made its point and its point is to be a rallying cry of anger and accusation. Such statements reverberate around the world.

Hamas also pays particular attention to rousing the local population and runs its own satellite TV station al-Aqsa (named after the mosque in Jerusalem).

"It constantly shows pictures of the destruction in Gaza and interviews with the public and survivors," says senior BBC Monitoring journalist Omar Yacub. "It shows children in prayers. It shows pictures of dead bodies in graphic detail.

"All this carries the political message that resistance is necessary. A ceasefire is not mentioned. Instead it seeks to mobilise and lift morale."

Hamas also uses a vocabulary that has to be decoded. For example, it talks about the Israeli "occupier". In the current conflict, this of course, can refer to Israeli troops in Gaza. But before the Israeli operation, they controlled Gaza's borders by land, sea and air and so were also called "occupiers". 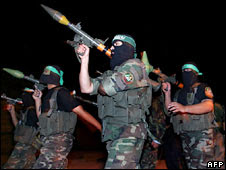 Hamas uses a vocabulary that must be decoded

And more generally, the word means that Israel occupies all the land of Palestine. This, Hamas defines by the boundaries of the territory mandated by the League of Nations to Britain after World War I, minus the east bank of the Jordan that Britain sliced off to give to the Jordanian royal family and which is now Jordan.

So when Hamas talks about resisting the "occupier", it is not just talking about resistance in Gaza.

Its occasional references to a long-term "truce" also must be understood. For Hamas, this does not mean a proper peace agreement with Israel. It means a cessation of violence, which could perhaps last for years, but under which it holds its options open.

And when Hamas says it is ready to accept a Palestinian state within the borders as they existed before the war in 1967, it does not follow that it would accept those borders as the last word. It hopes to re-establish Palestine as it once was.

Sometimes Hamas leaders come into the open. A few years ago I interviewed one of them, Dr Mahmoud Zahar, in Gaza. He referred to Israel as "a foreign body. It does not belong in the area".

Dr Zahar has now declared that Israel's attacks in Gaza have "legitimised" the killing of Israeli children. I doubt if he has changed his mind about Israel being a foreign body.

Of course, there are those who say that you must not listen to the rhetoric, which in the Middle East can mask a reality that the speaker wishes to hide.

They also point out that the PLO once talked in similar terms and that it is now in negotiation with Israel about a final settlement. But equally, until the rhetoric changes, it is fair to look at what it means.