Sana Elbaz, the daughter of a Bedouin family from Tel Sheva who lit a celebratory torch at Israel's 60th anniversary ceremony in Jerusalem, saw her car set ablaze by unknown persons outside of her house on Thursday night. A molotov cocktail was also thrown at her door, but her house remained undamaged.

Elbaz was watching TV late on Thursday when she heard the sound of glass breaking outside of her home. She alerted her neighbors, who helped to put out her blazing car, and called the police and her husband.

"The first thing that had crossed my mind when I heard my car being torched was that someone was taking revenge on me for participating in the ceremony," Elbaz told Ynet. "These are cowards. We are a part of this country and so shall we stay," she said.

"I knew I would be receiving unsympathetic responses, but I didn't think it would happen so quickly. I guess someone wanted to light a torch of their own," she added with a smile.

Sana Elbaz heads the first of its kind daycare center in the Bedouin sector, and was responsible for a revolutionary educational program that is said to have brought about great changes in Bedouin society.

Her husband Khalil told Ynet: "I have no doubt that the molotov cocktails thrown at my car and my home were because Sana lit the torch on Independence Day. Even before the event there was denouncing talk about the torch and it looks like today someone has acted upon it. 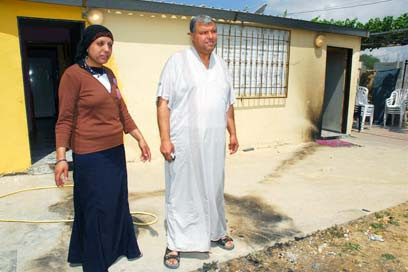 Sana and Khalil Elbaz outside their home. (Photo: Herzel Yosef)

"We are a very well-known family in the community, and until Independence Day we were never threatened, I guess some people are bothered by it. I am a man who knows his people well and so I realize how many are opposed to participation in such an official ceremony."

Khalil added that despite the torching he and his wife are proud that Sana was asked to light the torch. "We are strong and fear nothing," he said. "They won't break us. Sana is a leading woman in education and she deserves the esteem she is receiving from the country."

The police have launched an investigation into the incident.