HOW WOULD DUTCH JEWS FARE UNDER EXTREME-RIGHT GEERT WILDERS? 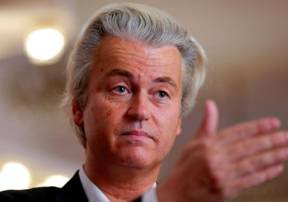 Jewish voters in the Netherlands are less inclined to vote for Holland’s populist rightwing candidate Geert Wilders than other members of the general public, Dutch Jewish commentator Esther Voet told The Jerusalem Post on Monday.

Voet is editor-in-chief of the Dutch Jewish Weekly, which released a poll on Friday surveying nearly 2% of the Jewish population of the Netherlands.
The poll found that Dutch Jews are less supportive of Wilders than the wider public, with 10% of respondents expressing support for Wilders’s PVV party, in contrast with some 15% in general public opinion polls.

Among Dutch Jews polled, the ruling party was the most popular, with 17%, followed by the center-left Labor Party, which received 12%.

According to Voet, there is reluctance among the Jewish community to support Wilders, because while he is pro-Israel, he supports a one-state solution. “Most Jews here still support a two-state solution,” Voet noted, adding that Jews have historically opposed right-wing populist parties.

But Hanna Luden, director of the Dutch Center for Information and Documentation on Israel, told the Post there is no one voting pattern among the country’s Jewish community, stressing there are both Jews who are supportive of the PVV as well as those who are critical of the party.

She believes the Netherlands is suffering from the same extreme divisiveness that is sweeping countries across the world.
“What we see is polarization over the whole world, between the Right and Left, religious or not, Muslims and Dutch etc... Polarization is not a good sign,” she said. Luden added that these sharp divisions have been in the air for a while, though she believes that it has become more pronounced since the election of US President Donald Trump. Clashes this weekend over the Netherlands’ refusal to allow entry to Turkish cabinet ministers have brought divisions to the surface even more clearly, divisions which Luden finds concerning.

Certain parties, she said, portray Dutch culture as a Judeo-Christian one, a depiction she objects to.
“What you see is division on many different issues,” she reflected, saying the end result will likely be a coalition of many different parties, similar to the composition of Israel’s government.

But there are some issues which are of particular importance to Jewish voters – the government’s stance on Israel and the government’s approach to Jewish issues. While Wilders is a staunch supporter of Israel, he has voted in favor of banning shechita (religious animal slaughter).

“This is a very dangerous step toward discrimination of minority groups... and maybe the next step will be circumcision,” Luden said. She noted that the right-wing PVV supports the left-wing Party for the Animals (PvtA) on the issue, though the two parties have entirely different motives. “PVV openly aims at ‘Muslim bashing’ and adds that the Jews should accept the inconvenience in PVV’s ‘war against Muslims,’” Luden said.

Luden also opined that there is a heightened sense of insecurity among various groups in the Netherlands, including the Jews. Her reflection on the subject is backed by the Dutch Jewish Weekly poll, which found that 45% are scared that they might become victims of antisemitic violence.

“This is an increase,” said Voet, emphasizing that respondents comprised Jews of all types, not just observant Jews who are visibly Jewish due to religious garb.
“As Jews, we are the canary in the coal mine,” she said, pointing to the demonstrations over the barred Turkish ministers, which saw protesters yelling “cancer Jews.”
“If you want to curse somebody, that’s the word you use,” she lamented, though she acknowledged that this is a not a new phenomenon.

Former Israeli ambassador to the Netherlands Chaim Divon told the Post that should Wilders become prime minister, his pro-Israel stance could translate into antagonism toward the Jewish community by the Muslim community. He stresses, however, that he sees this as an unlikely outcome of Wednesday’s election. Should it occur, he speculated, the Muslim community could draw the conclusion that due to the support Israel gets from Wilders, the Jewish community in turn supports him and his anti-Muslim policies and rhetoric.

Both Voet and Divon also mentioned Wilders’s vote against shechita. “That’s when a lot of Jews thought, ‘He’s not as much of a friend as we think he his,’” Voet said, while Divon said that he may well vote that way on the issue again.

“As it is now, there are two parties in the coalition: the VVD, that is very pro-Israel and that is a guardian of the Jewish community,” Voet said. As the biggest party in the current coalition, she said, the VVD ensured that Labor did not “rock the boat” with Israel.

But the situation is likely to be different in the next coalition.

“Even if the VVD is the biggest party, it will not have the majority of the coalition,” she said, asserting that other significant parties likely to join the coalition will push for measures to boycott Israel. “The Jewish community here in the Netherlands takes that personally,” she explained.

The Jewish population numbers some 52,000 in the Netherlands, whereas there are some 900,000 Muslims, Voet pointed out.
The left-wing parties, she said, see the Jews as “irrelevant,” showing far greater concern about the Muslim community and the LGBT community.
“This is also scary,” Voet said.
Divon has a more positive outlook on the situation in the Netherlands, expecting little change for the country’s ties with Israel and for its Jewish community.
“Marc Rutte and his party are very friendly [toward Israel],” he told the Post, noting that even when the two countries don’t see eyeto- eye, it doesn’t affect their strong relations.
Divon described the Netherlands as “one of Israel’s best friends in Europe” and is confident it will remain that way, no matter what shape the next coalition takes.
“I don’t see a dramatic change,” he added.